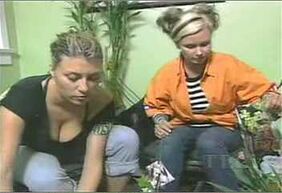 Genevieve Gorder (born July 26, 1974 in Minneapolis, Minnesota) is a star of the TV show Trading Spaces on The Learning Channel. The show—another TLC rip-off of a British hit—consists of neighbors visiting each other's homes and, under the guidance of a designer, ripping apart one of the rooms to make it "better." Genevieve is famous for working barefoot, and for actually listening to the contestants, while another designer such as Hilda Santo-Tomas would just tell them she knows more than they do as she screws up their homes. Most viewers of Trading Spaces call Genevieve "the most nearly tolerable" designer.

And there are two big reasons for this. Fully 97% of the men[1] who watch the show are boyfriends or husbands pretending to like it so that they can get a load of fully-loaded Genevieve. Unfortunately, her usual modest black shirts and pants make her toes the only full frontal nudity on the show, though on a few occasions she has worn low-cut halters that reveal much of her bounty when bending over to grab some moss or adjust a plank of wood. 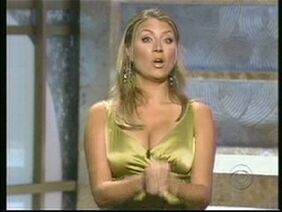 A great Genevieve moment, however, came during the 2003 People's Choice Awards when she wore a low-cut, cleavage-baring dress. This was the highlight of that or any other award show, and ratings, etc., reached Twin Peaks never again seen since Genevieve stopped hosting.

For those without comedic tastes, the so-called experts at Wikipedia think they have an article very remotely related to Genevieve Gorder.

She has gone on to host Town Haul, in which she instructs people how to improve the sight of their small towns. Viewers show little interest in it, since Genevieve also shows little. Her latest show is Dear Genevieve, where she answers design questions. Nostalgic viewers write to ask her to come remodel their homes, most just wanting another peek at that Dear rack in a tight shirt; or perhaps to have her pick the best spot for a tall partition, as they admire hers.

In 2010, she interviewed for the job of weather presenter at the BBC, but did not land the job despite tasteful attire because she occluded both Cornwall and Wales on the national weather map.