Five O'Clock Shadow of the Colossus 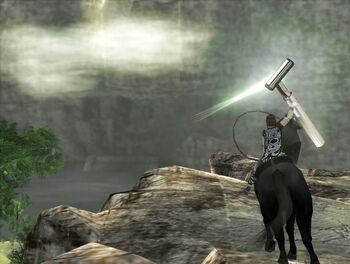 Some mountains are scaled; others are shaved.

Five O'Clock Shadow the of the Colossus is a video game for the Slaystation 2, revolving around a hopelessly lost juvenile barber and his seemingly improbable mission to track down sixteen, not shown to scale, colossi for a quick shave-and-a-haircut. Armed with only courage and a comb, our young hero must battle for his life, and some tips.

Set vaguely around 2,500 BH (Before Hairspray) and based loosely on hairdresser folk lore, our protagonist, bidden by an oddly ambiguous yet obviously trustworthy voice from the sky, is instructed to seek out and shave the numerous Colossi who routinely drop in for no apparent reason. If he succeeds, he gets the girl. If he fails he gets his brains smashed out by a 60 foot furry with a club.

Your business cards not yet printed for distribution and your barbershop missing its pole, basic gameplay involves locating each beast individually, then scrambling all over its body in an effort to trim its excess filamentous outgrowth for fun and profit. With no magazines or reading materials provided, however, the giants' need for distraction resorts to rendering your attempts futile by shaking you off, crushing you, and complaining about your preference of aftershave lotion. No two patients are same, so you'll need to strategize and continually re-figure out how to combat the overgrown Widow's Peaks and out-of-style goatees.

Fans of the game proclaim its dramatically different experience as fuel for the "Games can be art too, Biznatch!" foundation. Every hair has been meticulously detailed and mapped, and a constant stream of cheerful elevator music is always present in the background of even the most bloody scene of a customers discontent. Some would dare so far as to say that it feels like you are actually combing the beasts. 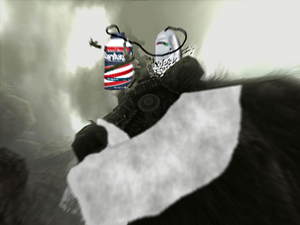 In later stages, you are provided with a shaving cream dispenser/buzz cutter, which greatly improves your chances of shaving the colossi. Even so, your attempts at making small talk remain very limited, for the colossi continue to emit ear-splitting roars when asked about the wife and kids...

Perhaps the most fearsome creature combed in the entire game is the goat whom the young barber rides on as he attempts to dress the colossi. Although it appears to be unthinking, beyond a basic S and M relationship, it actually harbors a deep hatred of all things barbered. In the final section of the game, it attempts to throw the hero into a pit full of rusty shaving razors. However, the barber succeeds in realizing the goat's intent, and shaves it before it can strike. The goat is horrified by this action, and after failing at legal action in court, pitches itself into the pit.

The ESRB rated this game T for Trial and Error.

As most know, to find the Vital Spot of a colossus, you must hold up the sword or whatever is Shineh. The final colossus could only be fought by an excessively large cat, possibly made of multi-bladed disposable shavers. Due to the colossus being 30 thousand feet tall and completely covered in thick hair, no gamer has ever defeated it. Rumours surround this follically-enriched behemoth, some claiming that there is, in fact, no creature beneath, merely shitloads of curiously green hair. Others have claimed that there is a creature, and it is covered in no less than 400 maps, pointing out various global points of interest, such as Area 51, the 'Real' Paul McCartney's grave, Atlantis and the current address of one Elvis Presley.

Programmers remained silent for months after the games release on the details of these rumours of the last Colossus, or the "Shaven 17th" as he became known to those who had never heard of double entendres. It was later admitted that they had plain forgotten what they had hidden on it's hide. Approximately 3 billion new rumours sprang up that day, though none of them grammatically correct.

No one has yet to comment on how the people who made and published the game could possibly know where Elvis is. However, it has been pointed out that fewer people doubt he is alive.

The colossus is fought in a weird dojo area, near the Shrine of War Shit.

This game contains possibly the most badass horse ever thought of. Yes. Cooler then Epona from Zelda. Agro to you stupid Americans. Agmont to us cool Frenchies. 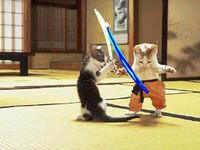 Whoever played the game must know of this. The barber's true mission is to revive the girl so he will no longer be a virgin... as well as he can no longer cut his horse's hair, because he slit its throat once. However, at the end, it proves impossible, since he is reverted to a damn baby. All the shit he's been through, and he's not getting any action for 18 years.

Several criticisms have come from the intellectual community, led by tutor to God, Professor Jack Thompson attorney in law. These were spawned after a reported incident in the Middle East, where a giant known as Goliath was slain by a young man called David, the act Thompson claims was inspired by the video game. He is quoted as saying "It is utterly shocking. This David was a normal young man who liked to read the bible and worship God. Then one day he got this game and just flipped, killing an innocent giant", Thompson has warned that we may see more attacks on grotesquely and unnaturally large men and therefore all video games and their makers should be burned with no mention of them to be made ever again.

In defence, the gaming community has pointed out that those events were fictional and that giants don't actually exist. These comments have been rubbished by Thompson as "Slanderous to giants. I'll see you in court," to which drew the response "Fuck you" from an irate gamer who wished to remain anonymous.

The case was eventually disbanded, as on closer inspection, the autopsy report revealed that David had shaved and not slayed Goliath, as was previously thought. This caused much controversy, with legal experts blaming sloppy handwriting on autopsy reports, autopsy report writers blaming near-sighted legal experts, and Thompson blaming everyone but himself, while taking a small fee.