From Uncyclopedia, the content-free encyclopedia
(Redirected from ESRB)
Jump to navigation Jump to search

For those without comedic tastes, the so-called experts at Wikipedia have an article about Entertainment Software Rating Board.

“This article is Crap Rated.”

~ ESRB on this article

“In Soviet Russia, game rates you!”

“My online interactions are not rated by the ESRB!”

“The ESRB is not rated by online interactions.”

~ The Soviet ESRB on online interactions

What is ESRB? The Entertainment Software Rating Board Rating (ERSB) is used to let parents know if their child should play that game. Since no single parent ever reads those things, it is almost as useless as this article, but never mind that.

ESRB means "Entertainment Software Rating Board" even in Wikipedia.

This is a picture of the common ESRB Ratings (click to enlarge):

As shown in the illustrations, the ratings are:

This means the game is about swimming, but unfortunately they misspelled crab. The most famous 'crap' rated game is the Freddi Fish series, which at the moment had about 3 million copies sold, but, ofcourse, people are still buying this immensly popular game. The main character in these games is a yellow fish calles Freddi, Freddi has to solve all kinds of cases, such as The Case of the Hogfish Rustlers of Briny Gulch. Though it may sound as an easy game, the opposite is actually true, Freddi Fish contains dozens of original puzzles and, as some experienced gamers say, the hardest sudoku puzzle ever made. To be honest I can't verify this, I'm stuck on a exceptionaly hard puzzle, and just cannot get the clue. 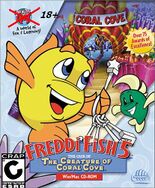 Crap Rated Freddi Fish. Note the "over 75 Awards of Excellence".

--SUCKS-- This means the game is either very scary or ponographic, it's about bloodsuckers or ... well... google "to suck".

--GARBAGE-- This is a game about cars, but Garage is misspelled. A populair Gar(b)age game is Putt-Putt. This game could have been just as populair as Freddi Fish, except for the fact that it's about a purple car, and nobody likes purple. Therefore it was quite revolutionary, that the brains behind Putt-Putt invented the different colors that you could spray at Putt-Putt so that you could finally get rid of that eye-hurting purple. At this point thousands of extra copies were sold, and Putt-Putt tried to reach the level of populairity that Freddi-Fish had already achieved. There is only one thing that was forgotten: You could change the colors of Putt-Putt into any color you can think of, except for the rather cute combination of dark yellow and bright orange, that made Freddi so damn popular. When people started realising this, Putt-Putt fell into a so called "deep, deep hole" and was never to be seen again.

--ABYSMAL-- Perhaps a game where you either have to save the world or conquer it, like most games.

--DON'T PLAY THIS-- Similar to the "Mature" and "Adults Only" ratings, this actually means it's one VERY bad game, but it warns parents that their child should not play it, since children should only play so-called educational games, like the MMORPG "Wikipedia".

--HORRENDOUS-- Since Horror means something is scarry, this is probably a game with lots of blood in it.

--JUNK-- This game is, of course, about narcotics The idea is that you are the last remaining Junk and you have to bring narcotics back in the world, so that everybody can be happy. Most people confuse 'junk' games, with game junks, which of course is something completely (well not completely, but still) different, this is one of the main reasons most people are not familiar with 'junk' games.

--TRASH-- I guess this is a parody of the original "Teen" rating.

Your score should be somewhere between 5 and 47,50. If it isnt, youre game is ABYSMAL. If it is, your game is still ABYSMAL.