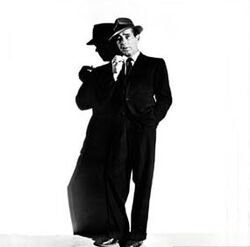 “The detectives come to check if you belong to the parents


Who are ready to hear the worst about their daughter’s disappearance.
Though it nearly took a miracle to get you to stay,


It only took my little fingers to blow you away.”

When the subject of great detectives comes up in conversation, most people immediately think of Elmore Thompson, who worked as a detective in the 50's, 60's, and the early 70's. His most famous case is the so-called PLO case, although many crime aficionados claim it was also his most disappointing, because the case led to no arrests. Thompson refused to comment on the case, refusing to say whether or not he even solved it.

Elmore Thompson was born in Tampa Bay, Florida on December 25th, 1915 as Elmore Mary Thompson. His father was Dr. Thomas Thompson, an orthodontist and son of John Taliaferro Thompson, the the inventor of the Thompson submachine gun. His mother was Mary Elmore, at the time a famous illustrator of children's books.

In 1917, Dr. Thompson enlisted in the U.S. Army, and went to Europe as part of the Dental Brigade of the American Expeditionary Force under General Pershing. On March 28th, 1918, he was killed during an artillery bombardment at the battle of Amiens while treating a particularly difficult malocclusion of a French soldier.

Thompson's childhood was particularly difficult. Not only had he lost his father at the age of three, but his mother was an alcoholic, and possibly suffered from mental illness(es). She never told him how his father had died, instead telling the young boy, "Your father left because you're a very bad boy. He hated you and couldn't bear to stay here, so he left." His mother also dressed him in girls' clothes, and of course, saddled him with the humiliating middle name.

Unable to take it any more, Elmore Thompson ran away at the age of fifteen. He never saw his mother again, and never spoke of her to anyone. He traveled to New York to visit his grandfather John Taliaferro Thompson in hopes of learning the truth about his father, only to discover that his grandfather had died the previous year, the day after the stock market crash of 1929. His uncles and aunts were involved in a bitter dispute over the Thompson Estate, and none would recognize him as the son of their departed brother, fearing another claimant to the remains of the family fortune.

Without answers to the troubling questions surrounding the "disappearance" of his father, he traveled West, finally arriving in Los Angeles, California in 1935. He held a series of menial jobs as he continued to look for clues about his father. Eventually, he finally got the answer to his question.

Life in Los Angeles and the mystery revealed[edit]

Critics claim that Elmore Thompson solved the "Case of the Missing Father" through serendipitous luck, rather than skilled detective work. His supporters counter that some cases can take years of difficult footwork before the detective gets a break in the case, lucky or not. Regardless, the story is an interesting one. Near the end of 1935, he happened to be in Pershing Square for the first time. He stopped by the statue of General Pershing, looked up, and remarked to no one in particular, "What a terrific smile!"

An old man sitting on a park bench overheard him, and said, "That smile is the result of the gallant work of Major Thomas Thompson." Then he smiled at the young Elmore Thompson, revealing himself to be the same man as the statue, i.e., General John "Black Jack" Pershing.

"My father was an orthodontist, and his name was Thomas Thompson, and I am looking for him," blurted Elmore. Pershing broke the sad news to the young man, and was touched by his story as well as his reaction: a bittersweet pride. There were tears in Elmore's eyes (as well as in the general's), but he never wept.

Thompson turned and walked away slowly, but halted when Pershing called out in a commanding voice, "Wait there, young man!" 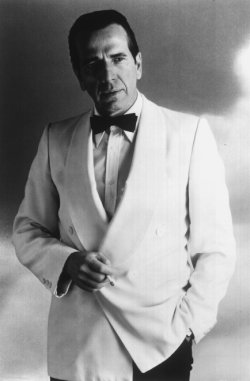 After slipping into his now familiar white jacket and slacks, Elmore was last seen in Northern Africa in 1951. His whereabouts remain a mystery to this day.

At this time Pershing held the position "General of the Armies" in the United States Army, the highest title in the armed forces, only given one other time, to George Washington. In the case of Washington, it was posthumous. Pershing had served as Chief of Staff, but by this time in the middle thirties, he had relinquished his duties to other men, and was for all practical purposes, retired.

Or so it seemed. Pershing had been quite close to Teddy Roosevelt, and although a staunch Republican, he was also a trusted advisor to FDR. He was well aware of the Japanese buildup and had a good deal of animosity for the rise of Nazism in Germany, not to mention Bolshevism in the Soviet Union. He was quoted more than once as saying, "We should take out one and then the other," for which he received a public reprimand from FDR. (He famously quipped afterwards, "In Soviet Russia, reprimand FDRs you!!".)

Top secret documents have recently been declassified and released by the Pentagon that reveal that during the 1930's, Pershing was building an espionage network at Roosevelt's behest. This network was the predecessor to the OSS and later the CIA.

It has been presumed that young Elmore Thompson went to work for this network when Pershing took him under his wing, although details are murky at best. Thompson first began running guns to Spanish Republicans in that country's civil war. Not much later, Thompson showed up in the Moroccan city of Casablanka, where he purchased a popular cafe. One might surmise that he was bankrolled by Pershing for this purchase, which gave him a perfect vantage point to monitor Nazi archaeologists engaged in various digs throughout North Africa. After the fall of France in 1940, the French colony of Morocco came under contol of the Vichy government, which was in turn a puppet of the Nazi Regime in Bavaria. Early in 1941, Thompson disappeared from Casablanca. A fortuitious disappearance, as he was being sought for questioning in a matter concerning two dead German couriers and the Nazi political officer of the region, Major Strasser. Thompson soon turned up in Brazzaville, capital city of the Belgian Congo, and then dropped out of sight just as quickly. Towards the end of the war, Thompson resurfaces in various locales in Europe. He is attached to Omar Bradley's staff, but is suspected to be a member of the OSS, a suspicion bolstered by his freedom of movement throughout the theater of war. There are also rumors of his turning up on the Eastern Front. Activities in Europe continue until 1949, when he is demobilized.