Dogs of the Dow 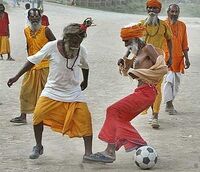 These footballers are wearing saffron togs. None of them has equity investments.

The Dogs of the Dow is a investment strategy popularized by Michael O'Higgins in 1991. It is not to be confused with the saffron robes one wears during Ayurvedic meditation, which would be the Togs of the Tao.

The strategy proposes that the investor select for investment the ten Dow Jones stocks with the juiciest dividend. Juicy is defined as the ten highest yields:

This suits investors who want to run spreadsheets rather than just get quotes, because juiciness is a reliable indicator that the price of the stock (the denominator) is in the crapper.

Following the strategy gives the investor enough "blue chips" to invite the neighbors over for poker.

Under other analysis, these stocks would be considered "dogs," or undesirable. However, these are no ordinary dogs; the Dogs of the Dow strategy suggests that they are mean junkyard dogs, with the potential for substantial increases in stock price. That is, everyone is deprecating their value, which means that everyone must be wrong. It is a variation on the Greater Fool theory — the theory (which every stockbroker advances to every cub investor) that any stock is a great buy, because there is always a Greater Fool (greater than that great guy I am talking to) who will be guiled into paying you even more than you are about to pay.

So ten major multinational corporations are simply mis-priced; eventually, this will be rectified by the price taking repeated upward thrusts against the next leg of the bull market; and while you wait, you will get hefty quarterly checks in the mail. The absurd yield will almost never be rectified instead by slashing or eliminating the dividend so that the company can survive.

In other words, practitioners of the strategy believe that a stock that is paying 7% during a recession is obviously one hell of a good deal. (See "Greater Fool" above.) Many "dogs" have recently collapsed in value, which makes them "oversold" and overdue for a rebound, rather than on their way to oblivion. 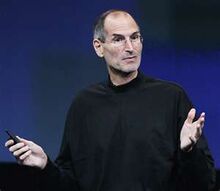 Dogs investors protect themselves by rejecting stocks with sky-high prices and executives who simply don't look the part.

Proponents of the strategy restrict their selection to the 30 Dow Jones stocks because the 30 are massive corporations, better able to withstand recessions / depressions / Jimmy Carter due to their access to credit markets, the resulting ability to acquire other companies that are not Dogs, and high-quality management. The 30 Dow stocks are all run by stodgy men (with a token woman as VP of Personnel, and often a Negro) in starchy, pin-stripe shirts. They all are shown scowling, though the Chairman of the Board attempts a Mona Lisa smile. They never have executives like Steve Jobs who shows up for the annual meeting wearing a muscle shirt and no tie.[1] They almost never just go bankrupt — at least not without first being tossed out of the Dow Jones — which would give the investor a warning (though not a do-over).

Many investors play a variation of the Dogs of the Dow strategy: They avoid complicated and confusing division[2] by ignoring the dividend and simply taking the stock value. In this variation, called the Chihuahuas of the Dow, they buy the 10 lowest-priced stocks in the Dow Jones, because these must be the best bargains. H.G. Schneider wrote in The Journal of Finance in 1951 that these stocks have the least distance down to $0 per share, which means the investor will lose less money per share even if he loses everything. Likewise, there is more room to the right on the number line, thus a greater potential for massive gains.

Ford Motor Company was a chronic Dog of the Dow — as it drops entire lines faster than people can stop buying the product — until it also discontinued its 9% dividend.

O'Higgins and others ran the numbers, as far back as the 1920s (when the world used to be orderly and predictable) and found that investing in the Dogs outperformed the market as a whole. They cited this as proof that there was a strategy that, if followed mechanically, would make money at the expense of all other investors, none of whom would simply switch and become Dogs investors themselves and ruin the racket.

For the religious among us who choose to believe lies, the so-called experts at Wikipedia have an article about Dogs of the Dow.

In 2014, John S. Tobey wrote an article in Forbes criticizing the Dogs of the Dow strategy. He said the strategy should use price weighting, because that is what the Dow Jones does, and it's up in five figures. He also said it should consider other factors, such as payout ratio and growth history, to measure which stocks are most truly loathsome. He did not say how to combine these into a strategy, though he seems to have done so, and reported that it bombed in 2013, and was unlikely to work in 2014 either.