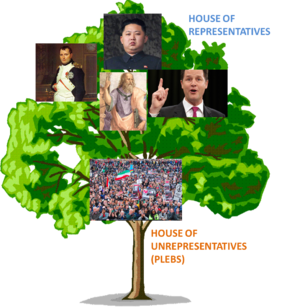 The Tree Model of democratic oligarchy.

Democratic Oligarchy is a system of government in which "self-determination exists for the majority of some of the electorate".[1] The electorate can be a Royal, a baron, a stock broker or any other nobleman, provided that they adhere to the principles of democracy.

The principal reason why a country may choose to run itself via a democratic oligarchy is so that it may appease Human rights activists at the same time as avoiding the chaos of debating between two different opinions in government. The Economist has considered Democratic Oligarchy as the perfect government system for a new, more liberal world.

The first use of this governmental system was in Ancient Greece which has always been claimed to be the first true democracy by historians. This claim is of course true as Ancient Greece had free speech and votes for everyone apart from women, slaves, immigrants, under-21s, Romans, gays, slavs, gypsies, communists and traitors of society (anyone who opposed the government)[2].

The Ancient Greeks of government very well and in the whole history of the Athenian parliament the Social Democratic Party of Greece won every single election.

When the Romans invaded (a long time ago BC) they stole everything of the Greeks from religion to industry and money. This left Greece in huge financial trouble until some Northern barbarians bailed them out. The Romans also took their government system. They took democratic oligrachy to heart and narrowed down the oligarchy to just one hundred senators, forming the council of Centurions in Rome. Every year they elected a new Emperor and then at the end of the year they stabbed the Emperor to death to allow a new life-long Emperor's reign to begin.

The Tree Model of Democratic Oligarchy[edit]

This Tree Model is used to represent the number of people who are represented by the democratic oligarchy system. The wider the part of the tree, the more power that section have and the more people in the pictures on the tree in one section, the higher the percentage of the population are part of that section.

The Tree Model is used extensively by many governments simply to baffle their citizens and justify that democratic oligarchy is the way forward, as it obviously is.

Democratic oligarchy has manifested itself, like a virus, a good, harmless virus into every corner of human society. The UN operates using democratic oligarchy by having a general assembly of all the nations (House of Unrepresentatives) who don't get a say in anything and a hand-picked UN security council made up of 12 nations (House of Representatives) who make all the decisions.

The UN has said that it will keep the system of democratic oligarchy when it finally reveals itself to be part of the Grand Conspiracy and therefore the New World Order.