Citizens Against Revolting Signatures, or CARS, is a non-profit organization on Uncyclopedia that seeks to reduce the number of ugly signatures. Its stated goal is to "eliminate entirely the need to use ineffective eye shields on Uncyclopedia." 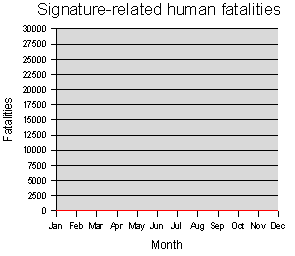 CARS cites this graph as proof that the organization's hard work has led to the complete elimination of sig-related deaths.

CARS claims that its programs, which make people aware of the dangers of signatures, have led to a decline in ugly signatures. According to the National Information Superhighway Traffic Safety Administration, Internet signatures are constantly becoming more aesthetically pleasing. In 2005, the average signature had 26.5 kilomondrians, as opposed to 17 in 1982. This increase is particularly dramatic when the giant increase in morons using the Internet is taken into consideration. 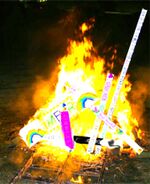 CARS sponsored a burning of revolting signatures, but they promptly discontinued the practice when it was discovered that fire warping only made the problem worse.

CARS was formed in January of 2005 by an unknown user. That user was bored out of his skull for many months, due to the complete lack of hideousness for him to disapprove of. Fortunately or unfortunately, his boredom ended in later that year, when revolting signatures first started appearing on Uncyclopedia.

CARS popularized the concept of "designated sigger". Designated siggers are artistically talented users who create custom signatures for users with the color-matching skills of Stevie Wonder.

Recently, CARS introduced its "7 by 2007" plan, which aims to reduce the percentage of people that go blind due to revolting signatures to 7% by 2007. To achieve this goal, its members regularly make random people go blind due to sharp sticks in the eye.