~ Noel Coward on Barns and Nobles

~ Oscar Wilde on Barns and Nobles 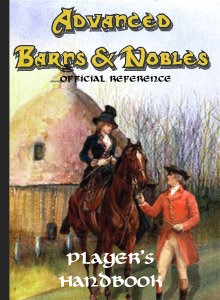 For those without comedic tastes, the so-called experts at Wikipedia have an article about Barns and Nobles.

Barns and Nobles is the most successful medieval farming roleplaying game, played by millions of teenage nerds worldwide. The current edition (Advanced Barns & Nobles: 4th Edition) has sold over 2 million copies in its first three years of print.

The game mixes a medieval setting with indepth character design to create the most realistic farm-based role-playing game to date. It is the most successful, though probably the least exciting role-playing game available, as most gaming sessions revolve around rolling dice to see how well each plot of your chosen crop grew in a given month.

"You must find a way to survive in a world of rising taxes, bad weather, and a fickle God..." (from introduction, page vi). The goal of the game is to keep your family and yourself alive. With the emphasis being mainly on yourself. Unlike other role-playing games, in which one becomes stronger and more powerful as higher levels are reached, as the character progresses, all those years of back-breaking labor and starving through lean winters take their toll, and your character soon becomes worn out and physically (not to mention spiritually) broken.

Character creation proceeds much as in other games, with characters rolling dice for the various attributes of their characters. Attributes include Knowledge, Wisdom, Intelligence, Dexterity, Comeliness, and Vitality. Most of these are useless except for Vitality, as this stat determines one's ability to slave in the fields, survive through famine, and resist the Plague. The next step is choosing a race. Your character's race is always human (unless you've bought the Medieval Livestock expansion pack, which includes rules for playing as a draft horse, ox, or sheep). The player then chooses a character class, which can be Serf, Ploughman, Miller, Cheesemaker, Milkmaid or Village Idiot. Players sometimes create a detailed background for their characters, which may include details such as their family background, personality traits, and whether they prefer horse manure or cow manure as a fertilizer.

Gameplay is managed by the "Farm Master" (who plays your feudal Lord), who at any time can raise your taxes (if the harvest is too good), or steal your comely daughter (that'll teach you for putting too much emphasis in that stat!), but usually just sits there and tells you to roll your dice, unless you have the skill "make friends" equipped, in which case he will occasionally give you updates on what's happening in far-off lands or in the palace, which does not affect your character in any way whatsoever.

The game's rules are described in detail in three core rulebooks. The Farm Master's Guide provides rules and tables useful for playing as the Farm Master. The Player's Handbook describes rules for the player and the various types of crops that can be grown, including barley, rye, flax, and millet. The Handbook of Disasters describes perils that the farmer will face, such as Crop Blight, the plague-carrying rat, the rabid dog, crop-eating field mice, and irritable cows.

The game mainly consists of constant dice-rolling, crop-rotation, and trying to get enough of your children to survive until the age of nine, when they can be sent to work slaving in the fields. The point is to see how long you can keep your character alive (and possibly your family, but mainly yourself). Many players also use the "pray to God" feature to try improve their stats, lengthen their life, or improve harvests in a bad year, but it is unclear whether this affects the game in any way. What is certain is that if the character doesn't spend one day a week using the "pray to God" feature constantly, very bad things happen (up to and including loss of character), so most players only use the feature that one day and ignore it completely the rest of the week. 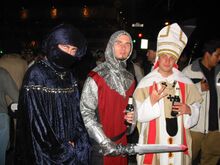 "Another country that's exactly like yours is pillaging and raping your emerging nation! Figure out how to survive in this turbulent world, in this game that puts the Feud back into Feudal. Once again, it ain't easy being a serf!" (from back cover).

This expansion is generally regarded as being inferior to the original, as much of the micromanagement has been left out. Survival was so emphasized that morality was questioned, as well as how desirable it would be to roleplay being on the wrong end of the invasion. Despite these criticisms, this expansion has done quite well.

"You'd do it too, if your life sucked this much." (subtitle)

This expansion explores the possibility of your serf turning to a life of crime, as he attempts to rob the Lord of his ill-gotten wealth to help the people. This is quite probably the most popular expansion in history, as it allows you to use the traits you've just been wasting as a serf. In fact, the only trait that doesn't assist in your villainous escapades is comeliness, which increases your chances of getting spotted. This game, while immensely popular, unfortunately has the downside of excluding your "Farm Master", whose character you are, in fact, stealing valuables from. This only increases the appeal for many, however, as you must simultaneously play both games at once while rolling twice as much and altering the info on both yours and the FM's gamesheets without the FM catching wise.

In this expansion, the impossible has occurred: a revolution has overtaken your land. There is a slight chance you'll break free from serfdom and emerge free at last! The goal of this expansion is to enslave the FM and show him what's what, though the primary goal is survival, as the revolution is very unlikely to be successful. This expansion works best where there are a lot more players than there are Farm Masters. Gameplay involves much of the same features as Border Wars, as raping and pillaging is commonplace (hide that comely daughter!). The best-case scenario in this game session is an ending where one of the players gains power, and everyone else returns to serfdom.

The success of Barns & Nobles has spawned a series of spin-offs and imitators, including: