For those without comedic tastes, the "questionable parody" of this website called Wikipedia have an article about Abu Hamza. 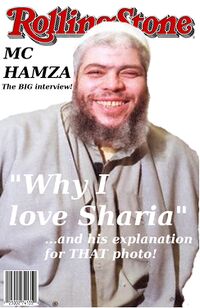 MC Hamza on the front of Rolling Stone magazine

Abu Hamza al-Masri (أبو حمزة المصري) (Real name Gustav Camel Abu Nasser Arafat[for once this is actually true]) is a muslim fundamentalist preacher and hip hop artiste from Finsbury Park, North London. Also known as MC Hamza, MC Hamzoid and Captain Hook. Creator of the 'Jihad Crunk' style of hip hop and singer of such hits as In Da Mosque, Hamza is currently serving a seven year prison sentence for dropping bombs of hip-hop truth. Hes also the hed of the DMPP (Dancing Monkey Pyjama Party) a group of terrorists headquartered somewere under the sea Plotting different ways to take over Aisa so they can make the citezens slaves for makeing there posh cars 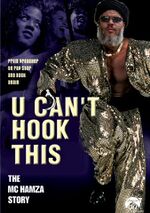 Born in 700AD, Abu Hamza is the founder of the controversial Jihad Crunk political rap music movement. At the age of 6, Abu Hamza was a precocious young boy with a talent for the clarinet. His typing skills were nonpareil, and he showed an interest in semaphore. At age 9 he won the International Twister Championship, a feat he repeated for the next four years, but tragedy struck as one day he decided it would be a good idea to insert his hand into the 8-track player of his father's car.

His previous endeavours now impossible for him to pursue, Hamza sunk into a deep depression in which he spent years lying in bed staring into darkness — perhaps because he was unable to turn the light on with his clapper. It was during a shoe-shopping session, when frustrated at being unable to find good velcro shoes instead of the ubiquitous lace-up variety, that he snapped and became the Hamza we all know and love today.

Having mangled his right hand in an 8-track cassette player while listening to Genesis' Turn it On Again on the M25, Hamza became a leading figure in campaigns for safer electrical equipment. This is why the gap in car CD players is too small to fit your fingers in. Hamza subsequently appeared with Phil Collins on an electronics safety video distributed in Ugandan schools.

After his accident, Hamza chose his replacement prosthetic in honour of the rock group Dr Hook, which his friend Osama was lead singer of.

The experience left Hamza in a distressing position as scientists used him to revive pirates, a species that had been extinct for at least 3 months. This trauma is still apparent today in his role of Captain Hook as celebrating Talk like a pirate day is a capital offence. Despite this, the fruits of this research led to the revitalisation of piracy and the creation of a furry friend we know as Abu Hamster.

He is also the greatest fisherman in the world and still to this day is the only man in the guiness book of world records to stop stop afghanis dying during the great whale hunt!! 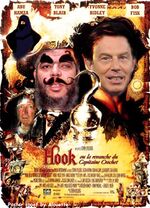 MC Hamza was the creator of many modern classics including:

On February 2 2006 Hamza became the successor to Captain Hook, taking on his former title.