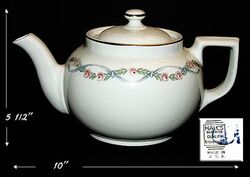 One of the earliest 3D animations was The rotating Utah Teapot. This is not the Utah Teapot though, but a teapot from Boston.

3D animation refers to the process of making cartoons seem realistic no matter where in the theater you are sitting. 3D animation requires that the theater-goer wear a pair of cardboard spectacles. Fortunately, this is less of a burden than that imposed by cinema popcorn.

The moviemaking technique was invented in the summer of 1912 by none other than Adolf Hitler, who went on to become the leader of the Unfree World and the host of the 1936 Special Olympics. Hitler managed to revolutionize cinematic animation, even before he introduced his innovation of poisonous aerosols to the field of personal hygiene.

Unfortunately for him, for us, and for the world of 3D animation, his tools were painfully slow. After nine years locked in his mother's basement with his tools and shelves of energy drinks, Hitler managed to complete only 240 frames--eight seconds--of his first 3D-animated film, Das Grue-Spiel (Toy Story). The frustration this brought him led him to abandon his work, change careers, and fatefully, become the leader of the Nazi party in 1921.

In an interview on his experiences as a 3D animator, the soon-to-be-tyrant recalled, "Eight seconds in nine years! If I could have produced an average of at least 1 second of footage per year, I might have considered continuing. Still, I think there's something big around the corner for me. I don't feel angry about the failure to fully establish 3D Animation as a profitable industry, but I do blame the limitations of my tools. I want to hurt things now".

Luckily for moviegoers, a young Steve Jobs was visiting Germany in the summer of 1986. At a small garage sale, he came across the crude tools that Hitler had used; also a reel containing the 8 seconds of das Gruespiel that Hitler made before giving up. Intrigued, Herr Jobs bought the box and contents for seven deutschmarks.

When he returned to the United States, he viewed this film on an old reel-to-reel projector. Jobs knew genius when he saw it. He immediately purchased Pixar from Herr George Lucas, taught the artists about this scheme of motion-cartoons, and before long, hired a team of programmers. They worked day and night and invented a similar but faster process based on the computer.

Over the years, Pixar created many 3D animated shorts, but it wasn't until 1992 that Jobs thought the artists were ready for their biggest task; completing what became known as Hitler's Toy Story. It wasn't hard finding the voice talent, both Tim Allen and Tom Hanks leaped at the opportunity when they saw the "big name" attached to the project.

In the BBC documentary The Makers of Hitler's Toy Story, Jobs stated that the movie's production time shortened after the TAB key was removed from all keyboards — an innovation that Jobs became known for.

Toy Story was an amazing success across the world. It was the first fully 3D animated film ever released, and the public clamored for more. Pixar released a slew of films in the years following and each one was a giant success. Before long, other studios were horning in on the action. Pixar came out with A Bug's Wife and DreamWorks was right there with Auntz. It wasn't until Dreamworks bought the rights to an old story written by Mao Zedong, Comrade Shrek, that they were finally able to compete with the big boys.