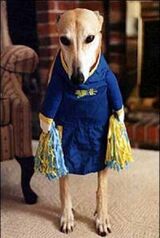 Xenotransplantation (jeez, that's a long word) is the process of changing one thing into another by introducing a third thing. Such third thingies are called xenografts or xenotransplants, kinda like the xenomorphs from Alien.

For example, if I were to put Bill Gates and Steve Ballmer's DNA together, then impregnate someone using some spare semen, I might end up with a smug bad-tempered bastard who throws chairs around. Thankfully, I don't have a lot of semen laying about all over the damn laboratory.

A more practical demonstration of xenotransplantation can be shown when we consider a human who has suffered kidney failure. Experiments have shown that a human being can survive for several minutes with replacement kidneys taken from pigs, sheep, goats and other mammals, including dogs. 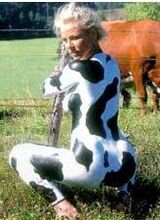 While the benefits of organ replacements from other species are obvious, there can often be hilarious funny unfortunate side-effects.

In the case of Ms Sue Smith, cheerleader of the year 2002 at Syracuse (top-right), her liver replacement — using her greyhound dog's spare organ — has led to a general lack of the poise and sparkle that's expected of the average cheerleader. This, we suspect, is caused by a leakage of the dog DNA into her own. It's difficult to prove this, at least to a scientific standard, but the indicators in the laboratory are leading us to that conclusion. That apart, Sue's health has improved dramatically and far from dying, which she expected to do, she's about to get married to her long-term fiance, who has yet to see her since her operation.

For those without comedic tastes, the so-called experts at Wikipedia have an article about Xenotransplantation.

Many experiments in xenotransplantation alas, are not as successful as the one that Sue Smith underwent.

In the case of Brigitte Ingerborgersonn of Sweden, the team had to replace her own heart, which exploded spectacularly during an Olympic figure-skating event, with that of the first available animal, which happened to be a cow. While Brigitte is now to all intents and purposes a normal woman with a massively overlarge heart, she insists on living in a field and eating nothing but grass, and demands to be milked twice a day. All well and good, and a lot of fun for our Swedish team, but not what one would call normal behaviour for a former Swedish figure-skating Gold Medallist.

All in all, xenotransplantation has its successes and its failures, but at least the failures are fucking funny can be said to be teaching us more about this fascinating and complex branch of science.