For those without comedic tastes, the so-called experts at Wikipedia have an article about Webcomic.

Web comics are one of the most dangerous weapons ever created.

Though they seem harmless to the casual user, in fact most are running a collection scheme. This collection is of money, and is rarely to ever used for the real reason. One instance of this was a collection drive to 'send Dave to coneticon', even though the limit was reached and broken, Dave did not get to go to coneticon, in fact Dave had to spend his holiday eating peanut butter with his fingers, but Dave doesn't even have any fingers.

We, the collection of useless people, believe that this money got put into a scheme to create the next stage of nuclear weaponry, currently only known as WC Bombs. 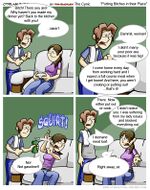 Webcomics in their prime

A Web comic, simply speaking, is a recent genre fomented by the public-access availability of the World Wide Web.

Taking its roots from syndicated newspaper comics, comic books, video games and the Jerry Seinfeld emphasis on how you can write about "nothing", web comics have become a popular pastime for creators, whom often lack shame, grammar skills and the ability to draw, or suffer delusions of grandeur and have yet to realize that most people read their work because it's available for free.

Webcomic comes from the Latin "e pluribus carborundum," meaning "too much drama for yo momma".

Especially popular among internet regulars are comics relating to video games. The most common form of game-related web comic consists of three panels and no punchline. Another popular format is the twelve-panel comic where something vaguely resembling humor happens five panels too early (see VG Cats).

There are currently over five web comics in existence, the most popular of which has over five readers annually.

Webcomics generate an average of 1.3 laughs per 1000 readers per year.

Why are these comics so popular?[edit]

Due to the less stringent requirement rules of the internet, webcomics allow authors to include aspects and situations in their comics that newspaper cartoonists couldn't get away with.

~ Your dentist on the header

~ The Bridgekeeper on why webcomics are popular

Why do people fall head over heels for this medium of idiocracy? Well, most people don't. Because web comics are only available in one place (you get three guesses), not many people actually see them. In fact, sight has little to do with webcomics at all, most people nowadays listen to their webcomics. The typical audio-web-comic was established in 1994, but remained unpopular until someone more influential copied it in 1998. Many people are credited with the creation of the modern web comic, some theorists suggest it was the great Emeril Lagasse, while others suggest the lame Karl Rove.

One of seminal properties of the web comic is the "hiatus", which comes from the Greek hiatum meaning "Damn, I'm sick of doing this everyday." Hiatii come in two forms: the indefinite hiatus or "giving up without really saying so", and the temporary hiatus. In this later form, the web comic "artist" (as they are euphemistically known) gathers together several other fellow "artists", friends, neighbors, children from down the street, and ex-sex offenders. Each of these are given one day of the "hiatus" in which to display their own version of a web comic, euphemistically know as a "guest strip".

It is generally accepted wisdom that these guest strips are better received than the actual web comic itself, leading the readership to plummet from 15 to -2π and results in immeasurable angst emmanating from the author, causing their webcomic to become a yaoi.