“I will always remember that song… "boom boom, bing boom, boom diddy diddy day, boom day". It was simultaneously the most artistic and least enjoyable song I'd ever heard.”

Wayne Kest (July 8, 1927 - July 8, 1924) was the brother of famous rapper Kanye West. Born in the small town Grangegrove, Holland, his childhood was very very disturbing, as he was often locked in the basement by his black parents for being a white bisexual transvestite. As he grew up he was often mistaken for Nuck Chorris. 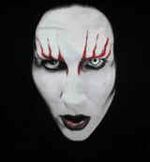 Wayne Kest when he was twelve, beaten up

Wayne Kest once had a fight with a meter maid for being a white bisexual transvestite. His parents proudly thanked her and threw Wayne into the basement again. He cried for 3 hours and swore to dedicate his life to becoming a normal person again. At the age of 16 both of his parents died. Wayne killed them during their Super Bowl marathon. He showed no mercy, and he ran away from home. After going through hundreds of foster families, he finally came in the hands of a man called Michael Jackson. They slept with each other, in the same bed and often Michael would rub Wayne over his legs. They stayed together for about 2 years. Then Wayne changed his name to Wayne Jackson. Later he would find out his parents came back from death. Wayne was terrified and Michael sued his parents. But his parents weren't stupid. They sued Michael, and they had Wayne testify that Michael molested him. Michael was so shocked that he took a boobjob and a few operations to his face. 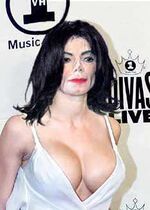 Michael when he had his operations

Wayne Kest's life during his trial certainly wasn't nice. He became a heroine addict, alcoholic, and started to travel a lot. He said he could travel through time with his mind, nobody believed him so they arrested him. A few months before the trial ended they had to release for a lack of evidence. During the time of the trial, Wayne Kest found out that his parents weren't his biological parents. He searched for his biological parents, and found them. He now also knows he had a brother who's name is a famous rapper called Kanye West. His (biologic) father was a Black Panther. He also found out his uncle is Jimsonweed. Wayne Kest heard that Michael Jackson got life sentence for molesting him. Wayne knew Michael wasn't guilty so he changed his statement so that his parents got a fine of 99 million dollars, or a sentence of 7x life. They took 7x life and are coming out of jail this spring.

Wayne Kest changed his name to Marilyn Ganson. He now is a famous antichrist. He is also known for his satanic entourages onstage. Like putting a microphone in his ass. He said that Michael Jackson would have wanted him to do that. Marilyn's musical career ended shortly after his first album flopped. The critics called it a fake album by them name of another similar looking artist called Marilyn Manson. Obsessed with rage Ganson took a shotgun and tried to kill every critic. This became a movie called: Jay And Silent Bob Strike Back. He lived his life normally until in the year 2389 he became president of the US, and he wanted to have humans blow up the moon. Even tough the humans knew this would kill them, they still did it because they do everything a president says, he is the ultimate mindcontroller. 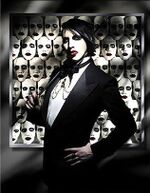