n the beginning there was nothing, and from that nothing arose Uncyclopedia, a great and magnificent tome containing all that was good. And once opened, Uncyclopedia spawned all that was funny and great. From the pages of Uncyclopedia sprang forth the knowledge of how to huff a cat, the meaning of the acronym "NRA", and enlightenment on how to beat a joke to death. From Uncyclopedia sprung Oscar Wilde quotes, beautiful pictures, and an annoying copycat named Wikipedia. However, right from the beginning, there was foretold an end. On the last page of Uncyclopedia, there is a small note. The note reads as follows:

Dear Reader, Uncyclopedia will not last forever. Eventually there will come the Unpocalypse: A fiery rain of Hebrews will fall from the sky, followed by forty days and nights of fog. Once the fog is lifted, Uncyclopedia will be no more. However, dearest Reader, take solace in the fact that you will have due warning. There will be 5 signs that the Unpocalypse is coming. The signs are as follows:

1. Thy first sign of trouble will be the featuring of Euroipods. After this unholy event, many months of battle will follow, and this battle will be called "The Rumble in Euroipods". There will be many deaths and many more bannings. However the war will end, and the citizens of Uncyclopedia will celebrate, naming the day of their victory "Victory in Euroipods Day"

2. Thy second sign of the Unpocalypse will be the conversion of Chronarion to the Dark Side. Currently Chronarion is the Almighty King and General of the Uncyclopedia Army. However, shortly after a State of the Wiki Address, he will defect to Wikipedia, crippling Uncyclopedia horribly. However, Chronarion's defection to Wikipedia will cause a great rejoicing in Wikipedia, and they will instantly pronounce him dictator of Wikipedia.

3. Thy third sign that a fiery rain of Hebrews doth this way come, will be the promotion of the anti-Chrons (Kakun, Nerd42, and Nintendorulez) to administrator, all on the same day. Due to the great gaping hole of funny left in the heart of Uncyclopedia after Chronarion's departure, these three will appear to have immense comedic talents, but this is not true. The humor put forth by these demons is a false humor, one not of Unyclopedia, but of Hell. The effects of these three being sysop'd will be the immediate deletion of Euroipods, Red Shirts and Fisher Price, and the immediate banning of everyone who ever voted Against one of Kakun's "pictures".

4. Thy second to last sign that the end is near will be horrible reskinnings of the Mainpage. With Kakun, Nerd42, and Nintendorulez in seats of power, they will have the tools to reskin the Mainpage and they will use them for terrible ends. The Reskinnings will include Republicanopedia, Christianopedia, Leukemiapedia, IFuckedYourMomOPedia, AuschwitzTheMusicalopedia, Goatseopedia and PaedoPedia. With each successive skinning more and more users will leave Uncyclopedia's Hallowed Halls, never to return.

5. Thy fifth and final sign of the Unpocalypse will be the coming of the Grue Hordes. With Uncyclopedia's defenses weakened, the Grue Hordes will come flooding through the unguarded gates spreading strife, famine, vanity, and stub articles. They will kill the men, and rape the women and cattle of Uncyclopedia. The Grues will leave in their path hundreds of slain users and admins, destroy everything, and will recede back into their homeland.

Once all of these horrible events have passed, no one will be left to worship Sophia. This will make Sophia mad, resulting in the aforementioned rain of flaming Hebrews that will utterly destroy Uncyclopedia. It has been said that if Sophia is feeling creative on the day of final destruction she may also make it rain deep fried fetuses, before the forty days of fog.

This is the end, my friends. Goodbye.

At the bottom of the page there are pictures, drawn in by someone using a 2 HB pencil. (you can tell because underneath the pictures it says "These pictures were drawn with a 2 HB pencil") 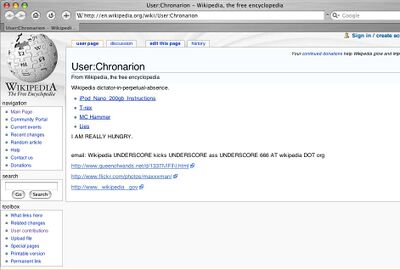 Underneath this picture in the same 2 HB pencil is written: What Chronarion's Wikipedia User page will look like

The planned logo for a Pedophile-themed reskinning of the Uncyclopedia

The following is a list of other signs of the Unpocalypse. These signs, however, are not all Sophia sanctioned.