Uncyclopedia:Confessions of an admin: Friends of gays should not be allowed to edit articles

That's it guys. I've had it up to here with this crap.

One of the biggest reasons behind the vandalism at Uncyclopedia is Friends of gays editing articles... We are in no way a homophobic site, but if their friends are going to vandalise just acting like Captain Obvious all the time then what kind of impression are they giving us about the gay community?

No. Vandalism is not a problem on Uncyclopedia with the help of that handy rollback button, or even the handy revert javascript codes that some users have made for themselves. But, the last thing I want is friends of gays editing articles. We could be spending that time that we are using to revert them, doing other things with our lives, like err.. oh yeah, writing articles.

Many ideas have been put forward to stop this from happening, for example blocking the entire site from editing. However, apparently that doesn't let anyone edit and above all that, Wikia have the cheek to turn around and say "That's not a wiki that anyone can edit, is it?" Psh... 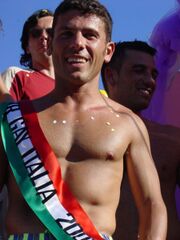 They think their friends are so gay. I personally know this guy, and we are like the greatest gay friends ever.

I mean seriously what is with this gay obsession these days? How come everyone is turning gay all of a sudden? It just seems that everyone in these people's class is gay. Why do you need to tell someone about it? It seems that at least once every hour I need to revert:

Well, I know that is great and everything and we, you know, really want to know what Jack does in his spare time but don't use Uncyclopedia to publicly announce a friend's sexual preferences!

Oh, and another thing. Why is it never "I, John Smith, like to have sex with boys."? These newly turned gay people might not want to come out as being gay. What if you just revealed that John was gay but he wasn't ready to tell anyone yet? How does that make you feel? You big, secret ruiner guy.

The kind of equipment Testers use. Just to make sure MediaWiki works.

These people could really do wikia's testing job.. people's.. job for them. With great lines such as:

With these great lines they remind me that the MediaWiki software is still working, thank God for that. Where would I be without them?

Note: This type of vandalism is reverted/deleted on sight. However, 9 times out of 10 it was something "wrong with the computer", "I fell asleep on the computer, can I be unblocked so that I can do it again?" or even "There was this huge fire in my house and my cat jumped on the keyboard, I sat there watching for a second until I decided it might be a good idea to get out of the house. Oh, and I also managed to press save."

These guys have the worst luck.

The male sex symbol, in all its glory.

There seems to be a lack of porn stars with 8" penises lately and I know where they are. They are editing this wiki. A user would log on, or even stay anonymous (so that we can track their IP just so that they can prove it to us) and click random page. They would then edit the article and add somewhere near the bottom "I have a big penis". Why are you telling me this? You already know I don't like gay people.. I mean, I do like them it's just.. No I hate them, they can all go to hell.

Maybe I should apply to have a wiki made just for them. "Telluswhoisgaypedia" or the "Encyclopaedia of gays I know". Something that these users could use just to tell the world someone's secret.

I also had another idea. That a "User-Wiki agreement" is to be signed before they can edit. It will declare that:

This is a fool-proof plan that cannot go wrong. It will stop these kind of users from editing stupidly or even making long ranty articles about how users know gay people. However, one of the problems is that these users could be making these stupid comments for a joke? Jokes are not welcome here.

These are the links these people should use to help them relieve their need to tell people stuff.