UnNews:Zuckerberg creates his own universe

One of these are fakes.

SAN FRANCISCO, California -- Facebook Grand Master Mark Zuckerberg has opted to become immortal by turning himself into an ever-youthful meme. Following criticism that the company he started[1] has become a major cause of on-line abuse and fat shaming, Zuckerberg is going to exist "only in a digital state" in the future. In a letter published by his own company, Zuckerberg outlined what he was up to. 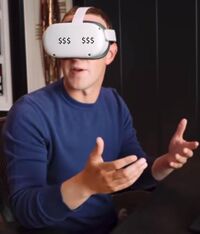 Zuckerberg's decision to go full meta from now on will soon make it impossible to see him in the flesh anymore. He will become fully part of the digital word, outside all human and legal restraint. Just like the plot for The Lawnmower Man, Zuckerberg won't need a rocket ship to see Mars; he will be able to get there into his own virtual universe a lot quicker.

The last of the old Mark Zuckerberg and an Edvard Munch inspired rendition.

Critics of Facebook see this latest move by Zuckerberg as inability to handle criticism that he is more than perfect, a claim that those who complain about him are people with rival platforms — or prefer the actor who played him in the movie The Social Network. But Zuckerberg may have the last laugh again.