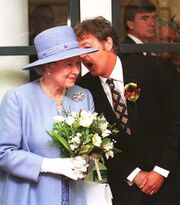 Paul: "They had better only start it after you die."
Queen: "Oh that's nice, dear, I'll tell them that."

LONDON, United Kingdom -- To cope with the death of Queen Elizabeth II, grandsons Prince William and Prince Harry and their wives Meghan Markle and Kate Middleton will start a Beatles cover band.

The new royal band will be called the Windsor Fab Four, as there is already a Beatles cover band called The Fab Four. Markle said they made the decision at the "last minute" after a walk around the palace.

"Well, I think it's great that they want to continue the legacy of The Beatles, y'know," Sir Paul McCartney stated, between takes for his posthumous album McCartney IV. "I actually met the Queen a few times, y'know. And she was a pretty nice girl, y'know. Although she didn't have much to say, I got her belly full of wine, and I even made her mine a couple of times, y'know."

Prince Andrew will be the band's "fifth fab fourth", singing the lead on "Hello Little Girl". Before his death last year, Prince Philip recorded the vocals for Abbey Road closer "Her Majesty", as William and Harry could not bring themselves to sing about their ailing grandmother.

The Windsor Fab Four will take the show on the road, performing a select track list for the crowd in each city the Queen's coffin passes.