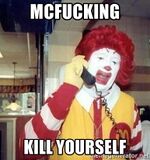 STEAK-ON-TRENT, United Kingdom -- McDonald's announced it is closing all its U.K. restaurants during the funeral of Queen Elizabeth II on September 19.

A spokesperson for the chain said, "We want to allow our people to pay their respects in the way they choose. (Except by spending your pay as you see fit, 'cause you aren't getting any.)"

Those who need a chocolate shake and a Filet O'Fish must wait until 5 p.m., when the corporation snaps out of it and the shops suddenly reopen. The spokesperson did not say if they will put on a breakfast shift at that time.

Britain has already declared the day a Bank Holiday, banks never needing much reason to shut. It is not, however, a Car Wash Holiday or a Boot Fair Holiday.

In Canada, a fellow Commonwealth country already scrambling to remove Her Majesty's likeness from its money, Prime Minister Justin Trudeau declared September 19 a holiday. Canadians who do not honour the Queen will presumably be rounded up, have their pets kicked, and have their bank accounts frozen.

Trudeau left further inconveniences to the provinces. Ontario Premier Doug Ford would not give provincial employees the day off, as he had just smoked a particularly large splib, but did declare a minute of silence, the better to hear a short speech he had prepared. However, B.C. has closed schools and given workers the day off. Nova Scotians will commemorate the funeral with a normal day, all the menfolk gathered at the dinner table and getting drunk.