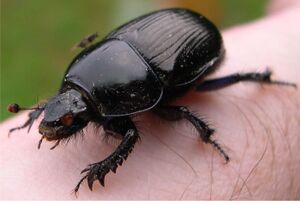 An Ugandan Massage Bug alights upon a thin westerner's chest.

Darkest Africa, UGANDA - Giant insects that deeply massage the human body have been discovered by white men in the deepest darkest jungles of Uganda. All Ugandans, of course, have known about these massage bugs for thousands of years, and keep them as pets.

"The Ugandan Massage Bug is attracted to muscular tension, and tries to eat it," says Ugandan University professor Kwame JoJoUnder. "When the insect alights on human skin its strong legs grab the victim in a death grip and tighten unmercifully to quickly subdue and suffocate their prey. To the human being it feels like a strong healing massage, and they are delighted to receive a refreshing deep-tissue session."

The frustrated insect, realizing that the prey's moans are not of agonizing pain but of tension being released, digs with a rhythmic pulsing motion harder and harder and deeper and deeper into the stressed worry-filled muscles of their human host. Then, on those feeding-frenzy days when a self-perceived deadly swarm of the bugs picks a lucky someone from the crowd, they instantly divide their delighted victim's body into sections and territories. Some of the bugs unrelentingly knead the neck and shoulders, others the thighs, upper arms, and tight calf muscles. The massage bugs, of course, send their strongest members to either side of the spinal column in a vicious and ravaging surprise attack meant to fatally subdue the victim, squeezing the muscles along its spine with all their might so that it will fall into unconsciousness and die.

"It feels wonderful!" says Hollywood actress Téa Leoni. "I've kept a constant supply of these amazing creatures in my spa room since they were discovered by white men, and the instant I walk in there and give them a wink they swarm on me like fat men squirm into cake filled with candy. I've never felt so relaxed in my life."

During the increasingly intense onslaught the insect swarm releases extremely toxic and foul-smelling chemicals onto the human-hosts skin, which the bugs instinctively know will instantly paralyze their victims, making them immobile for later consumption. The human host experiences these scents as not unlike lavender and jasmine, providing a healing aromatherapy atmosphere to the spa-like experience. Those who hear the 'call to arms' buzzing that the bugs excitedly make during their 45-minute attack cycle will never forget it, as the ears of the human host remake the bug's menacing battle-roars as New Age music reminiscent of Enya or the smoothly-soothing chakra-chanting warbling of Tibetan monks. Later, about the time that the massage recipient starts lighting candles and sipping wine, the bugs, signaling to their fellows "to hell with it", move on to locate and conquer their next fortunate unsuspecting victim.