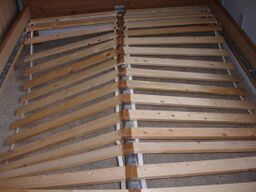 Hostages had to build their own beds. Many of them not being able to follow the instructions.

Police negotiated with the building for several hours resulting in the hostages having to spend the night inside. Hostages were given the choice of either sleeping on the floor or building their own bed with the supplied materials due to the fact that the display beds are for display only. Peter Elmose, the shop manager told UnNews that despite the fact that they were trapped inside a living building that "it was a really nice evening, enjoying each other's company," and that "everyone had a full night's sleep, our mattresses are good". The captives also treated themselves to the stores canteen and cafe for food and drink as well as watching TV. Hailey Smith, a 6 year old girl who was taken prisoner by the building, said "it was like a mini holiday! I had so much fun. I hope to be taken hostage by McDonald's next!"

The buildings' demands for the release of the hostages included a steam clean saying that the carpet inside the store was dirtier than a homeless mans asshole. It also wanted a private jet which buffled investigators since it would need a jumbo jet to even get on.

After a 14 hour standoff, Police made the decision to enter and extract the hostages. The Politiets Aktionsstyrke, the Danish SWAT, were called in. The team rescued all the hostages except a few. One customer and three staff members, whose names will not be mentioned for respect to their families, were killed by the strike team thinking they were mannequins. When the victims were reunited outside, a handful were then killed by frost bite from the heavy snowstorm. The building was also shot dead when it pulled out a screwdriver on the officers.