Google's colorful, playful logo gives no hint of the corporate politics within.

MAGA-LAGO, Florida -- Google announced on Tuesday that it will not distribute the app for ex-President Donald Trump's social media outlet, Truth [sic] Social.

The giant corporation said Trump had failed to address its concerns about content moderation. Among other concerns, the ex-President can post to his own outlet with impunity, slandering Hollywood stars and giving outrageous takes on current events, such as his recent post, where Trump stated that Facebook's complicity in silencing the news on Hunter Biden's laptop should result in President Joe Biden being frog-marched out of the White House and Trump being re-installed into the Oval Office by U.S. Marines, "or at least an immediate national re-vote." 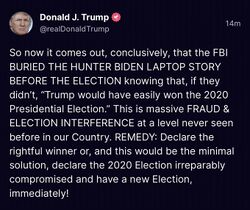 One of the abuses Google insists that Truth Social "moderate" is amateur interpretation of the U.S. Constitution.

The announcement constitutes a major obstacle for the former President, as Google controls most of the world's web searches and most of America's cell phones. Moreover, Truth Social, like the many other attempts to replicate Twitter but drop the trolling (or at least focus it at contributors who insist the 2020 election was on the level), has a seriously crippled browser interface. Truth Social executives insist that the app will resolve these problems, while creating no risk that users' personal information will be passed to the Republican Party fundraising boiler-room.

Google suggested that effective moderation could be achieved by hiring moderators like former Vice President Mike Pence. Pence could reprise his role on January 6, 2021, when he stated, "No, Mr. President, you can't do that."