UnNews:Crikey! A Nation in Mourning

Look at the size of that beauty! 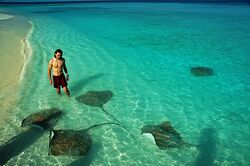 The police are said to be looking to question this group of individuals.

Brisbane, Australia: The whole Australian continent has been shedding crocodile tears today at the announcement of the death of one of the most popular members of the Australian Royal Family, Steve Irwin. Irwin, who was third in line to the throne, had recently had a small part in the popular wildlife documentary Snakes on a Plane.

Irwin was known to court controversy on a number of occasions, including the 2003 attempt to feed his son and heir to a crocodile, and his recent charge of "critter bothering" which resulted in a restraining order. Details of his death have remained sketchy.

There has been much speculation and rumour regarding the circumstances surrounding the death. Some say it was a sea creature wrestling match gone wrong; others claim he was assasinated by extremist animal rights cells. There is also a rumour that he has faked his own death so he can go back to live among nature and animals.

A spokesperson for the Australian Government, a Mr Paul Hogan, is reported as stating "Strewth!", though it remains to be confirmed if this is an official response.