UnNews:Connecticut is dangerous in the dark 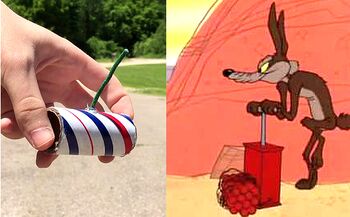 BRIDGEPORT, Connecticut -- An unidentified 30-ish Connecticut woman blew up her hand by lighting what she thought was a candle that turned out to be what is described as a "quarter stick of dynamite".

A power outage occurred in the Bridgeport area, which has never occurred in the state or anywhere in the US for the last 300 years. Therefore, there was never a need to have a supply of flashlights, candles and matches or lighters handy, "just in case". It was explained that since Home Depot was closed, the family could not buy emergency lights, since those work magically without having to be charged up first. Rummaging around in items apparently left by a previous homeowner, the woman found what she thought was a candle and lit it.

Now, since schools, especially Godless public schools, do not teach what a candle is supposed to look like, no blame can be placed on the woman. She is probably an atheist besides who never saw a church candle in her life. So she had absolutely no experience of handling something made almost entirely of wax vs. something possibly wrapped in wax-coated paper. Lack of wax experience by pagans is often blamed on never eating stale Krispy Kreme doughnuts. Further, since she was not required by law or by her childhood peers to watch Roadrunner cartoons, she was also unaware of what dynamite looks like. Since common sense dictates that if you find a string, you should always light it, the tragic accident was both understandable and unavoidable.

While the injuries were severe, the description of the explosive is somewhat questionable. A real quarter stick of dynamite would likely have killed her with only certain species of coyotes able to survive such a blast. Also sticks of dynamite need a detonator cap which are usually not left stuck in a stick of dynamite nowadays, unless one is such a coyote. Further, nowadays the detonators are activated by electrical or chemical means as also said coyote could explain. But there is the famed M-80 firecracker, well-known to pyromaniacs and maladjusted and evil children, said to have the punch of a quarter stick of dynamite but actually not as strong (think Donald Duck vs. Chip n' Dale). Those have fuses that can be lit and can cause injuries as described by authorities.

The woman is yet to be arrested by federal authorities for acts of terrorism. Local gas stations have closed in case she happens by, and neighborhood birthday parties now have security guards checking for any outside "candles" being brought in. United Airlines, however, will continue to allow Olympic torch carriers on board all flights.