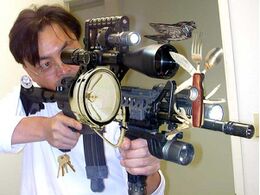 The outcome of the inevitable redesign is only speculative, but many hope this is what it will look like.

TUCSON, Arizona -- The recent shooting of Rep. Gabrielle Giffords here by crazed gunman Jared Lee Loughner has Glock Ges.m.b.H, the Australian Austrian arms manufacturer, shaking its head in disappointment at the failure of their Model 19 to deliver a lethal shot. According to police, the weapon used was a Glock Model 19: a compact, semi-automatic pistol which fires 6.9 mm. anus-bleaching rounds. Loughner reportedly shot the Congresswoman through the head at near point blank range. The bullet entered one side of her skull, did a little dance, made a little love, got down tonight, and exited the other side. Shockingly, she survived and is currently in the hospital in critical condition.

Austin Leichenger, one of Glock's foremost designers, claims he was personally disappointed in their Model 19's failure to do what it was intended to do. "It's disheartening to hear that a weapon you helped design could kill a vicious, battle-hardened nine-year-old girl, but not a docile, defenseless Democratic Congresswoman. It makes our Model 19 look inadequate." According to Leichenger, bat fuck insane psycho killers make up an important part of their customer base. "Our Model 19 served Seung-Hui Cho well, and we were quite proud of this. This [recent incident] is just utterly embarrassing for us." Glock says that it is considering redesigning its Model 19 to be "more effective at close-range headshots outside of grocery stores." There have been a few speculations from gun enthusiasts as to what changes could be made to improve the pistol. Mr. Dick Hastings, a Tucson gun enthusiast, suggests that Glock make their handguns "more bigger and cheaper [sic] and more bullets and gunpowder."

The Better Business Bureau of Arizona claims it will be filing its own complaint against Glock. With guns, they say, it's often debatable as to whether any failure was a result of the shooter or the weapon itself. In this case, they claim, it's apparent that the failure was a result of the handgun. "She should be deader than a ... well, I can't come up with a metaphor, but she should be pretty dead," says Patricia McMillerson, a BBB spokeswoman.

"The use of a 0.44 caliber Philly Derringer to fatally shoot Abraham Lincoln caused demand for that particular gun model to soar," says headshot historian Walther Remington. According to him, the disappointment from Glock is understandable. Experts estimate that demand for the Model 19 and all Glock handguns in general will drop, and for good reason. "Consumers want products that work for what they are intended. Loughner is probably feeling serious buyer's remorse right now, and I hope Glock will offer Loughner a discount on his next purchase to help rectify this."