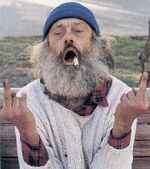 TODAY (Unless You're Reading This Article Tomorrow, or the Day After That, Or The Day After That): UnNews reporter William Bork, evil twin of Robert Bork, follows a lead on a rare chinese dish (name not disclosed) which requires internationally illegal plutonium rods to create. When he flew his Roflcopter to the nearest nuclear power plant he could find on Google maps, he was in for a horrible suprise. Reporter William Bork say, in an interveiw by William Bork, "It was horrible. All I did was fly up to the gates in my Roflcopter" ("okay, maybe behind the gates" he admits after further interrogating himself) "and ask how to get plutonium. And do you know what he did? DO YOU KNOW WHAT HE DID???" At this point Bork collapsed from hypertilation. However, he managed to track him down and contact him on AIM later. 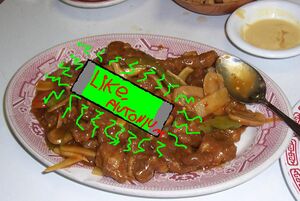 A rare (and priceless) chinese dish. Still, I don't know why people like it. SERIOUSLY, the last time I had one of the fucking things, I was barfing all night. I've never eaten asian food since. And if you like asian food, you're a douchebag.

After further prying, WIlliam spoke up. "He declined comment. That's right, he refused to talk to me. ME, and UnNews reporter. We're the most trustworthy people who don't live in Tibet." Obviously, the public was in shock after hearing this. Within minutes, complaints were arising in the US government, and petitions were being signed agaisnt declining comment, especially on menial and everyday matter like plutonium acquirement. But the story goes on. William Bork, still talking to himself on AIM, continues: "After this hideous rejection (the nuclear PR representative was pretty hot- I asked her out, but she declined comment on THAT too...). So I got back to my Roflcopter and flew to Chinatown, San Fransciso.By the time I was there, I ran out of FULES in my Roflcopter, so I had to jump out. After a conveniently and implausibly soft landing in a dumpster, with my Roflcopter exploding dramtacally in the background, which was l33t." (Remember he's till on AIM).

"So I went into the restaurant to which the dumpster I had fell in belonged. It seemed like a good place to start (and now that I think about it, all the spent plutonium in the garbage was pretty suspicious)." After this point, Bork was hesitant to continue. Obviously, the following events were even more horridly traumatic than those preceding it. From here, William Bork could ascertain no more. He would have to ask everything-guru and minor deity, Oscar Wilde. Oscar Wilde declined comment (DECLINED F***ING COMMENT I SAY, DO YOU HEAR ME??). However, through a plot convenience, Bork decided that his story should be heard. "So, I went into the building. All these burly guys with tattos look up from their tankards at me. By their presence, I judged that there must be a carnival. ALert to the danger more than ever, I asked the barkeep -William Shakespear- if he knew anything about the Plutonium food. And do you know what he did? He declined comment! I have never been so struck by the nerve of someone like that. It was n00by. And then the bouncer threw me out. *manic ravings*" Again, the public was outraged. Other news reporters agree with Bork's opinion. "It was my first day on the job." said an anonymous reporter. "Somebody actually told me that they wouldn't tell me their credit card number that had been stolen." But he continued. "They shot me here, here, and here".

Public reforms are underway. Word is that ex-KGB agents are leading the reform against unfair personal privacy in the US and UK. Unfortunately, the US Federal government has declined comment. In the UK, government officials laughed so hard that they died. Due to the number of casualties, this has all but the dissolved many eurpoean governements, and people are already acting out scenes from Mad Max in beat up cars on the highways. William Bork, signing off.