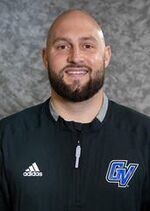 The Lakers' new offensive coordinator got offensive before he could coordinate anything.

Coach Morris Berger, hired last week to be the Lakers' offensive coordinator, is not actually dying, except in the career sense, as he made the offensive suggestion to the student newspaper that among the three people he'd like to go to dinner with are Adolf Hitler.

"The way he was able to lead was second-to-none," said Berger. "How he rallied a group and a following, I want to know how he did that. Bad intentions of course, but you can’t deny he wasn’t a great leader." "How he did that" is generally thought to owe to machine guns, also lots of Passenger Rail with an emphasis on one-way tickets. Berger also named John F. Kennedy and Christopher Columbus as his ideal meal partners at the interview, which was conducted last Sunday in the parking lot of the McDonald's in nearby Borculo, as it, like other McDonald's in that part of the state, is shut tight on the Lord's Day.

Through the wonder of modern Animatronics, the Make-a-Wish Foundation was able to reanimate the German dictator and the two will dine together next week, Berger using an assumed name that doesn't sound so Jewish. It is expected that both men will commisserate about tragically losing a coveted job, though in Berger's case, it is not yet final, as the University is conducting a "thorough investigation." However, there are very few cases of the student newspaper, whose editors hardly know which end of the football is up, using deliberate lies to hound an adult out of the community.