UnNews:Clinton apologizes to Obama (sort of) 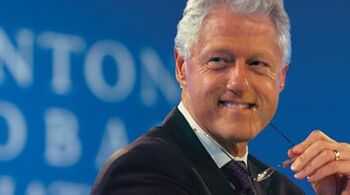 “I'm very sorry for what's happened to Obama's ratings,” Clinton said during an interview with CNN's Wolf Blitzer on The Situation Room, a talk show that continues to struggle for ratings. “I thought, like most of the rest of America and the chief of the Federal Reserve, that something has to be done concerning the 'fiscal cliff' before the election, but, apparently, according to Obama, the nation's imminent economic collapse can wait until after the election in November.”

“That doesn't sound like much of an apology,” Blitzer remarked.

“How are your ratings, Wolf?” Clinton retorted. “Fox News is eating you alive, isn't it?”

Earlier this month, Clinton warned Congress of a “looming 'fiscal cliff,' over which the nation was about to hurtle and called for immediate action. “Lawmakers,” he said, “should approve an extension of former president George W. Bush's tax cuts, even if he was a white president, and curtail federal spending immediately.”

Obama is on record, multiple times, for opposing any tax cuts and for projecting billions of dollars in additional government spending in his ongoing effort to “redistribute wealth.”

“His Robin Hood mentality is going to bankrupt this great nation,” Clinton predicted.

In his interview with CNN on Thursday, Clinton sought to explain away his initial remarks.

"Given the dire condition of the economy, I really was under the impression that Congress would have to do something before the election,” he said. "Once I realized that Obama plans to do nothing until the first of the year, I supported his position, albeit reluctantly.”

Obama campaign guru David Axelrod was not impressed by Clinton's apology. In his own interview with Blitzer on Thursday, he said, "I'm not asking for an apology from Bill Clinton. He can take his 'apology' and stuff it. A has-been left over from the '90s, he's out of touch with America—and with reality.”

Clinton's apology, some pundits pointed out, is “worded so as to cast further aspersions upon President Obama: he repeatedly refers to the president's attempt to put off the tax cuts issue until after the election as if postponing the matter is a political strategy rather than the president's heartfelt conviction as to what is the best action to take with regard to his campaign this country and his reelection chances its financial well-being.”

Federal Reserve Chairman Ben Bernanke recently came down on the side of the first black president, rather than siding with the sitting black president. “If the United States hopes to survive, we need immediate, long-term, if not permanent, tax cuts for everyone.”

“Not to mince words,” he added, using a phrase that, pundits believe, may be intended to refer to Obama's homosexuality (“mince” often is used as a pejorative to describe the way that gay men swish their hips when walking), “if no action is taken and the fiscal cliff kicks in, it is very likely that the economy will contract and plunge the nation—and the world—into a protracted depression.”

The Obama administration characterized the chairman's “gloom and doom prediction” as “sensationalistic.”

“Chairman Bernanke's out of touch with America—and with reality,” Axelrod declared.

Meanwhile, Bernanke insists, “The sky really is falling—or is about to.”