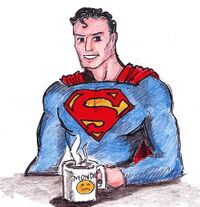 An artist's impression of Superman having a cup of coffee as he gets ready to rip off other online news outlets.

METROPOLIS, Iowa -- Clark Kent, who is also Superman when he takes off his glasses, has left the Daily Planet and now plans to use his superhuman speed to write an online newspaper entirely on his own, thereby creating the first solvent media outlet online.

In a year in which El País[1] laid off a third of its staff, The Guardian reported an eye-watering £44m[2] loss, and The Onion grossed just $12, Kent's plan is seen as revolutionary.

Dr Joanna Corey, professor of economics at California State University explained, "The problem with most newspapers is that they have to pay lots of journalists to write all the articles, vomit forth all their opinions, and give all the links to funny YouTube videos. And they only make money from online advertising because nobody buys papers anymore. With this model, Kent can do all that by himself, and keep all the money he makes!"

Online outlets have had two possible business models up to now: living off a rich benefactor, or the hope of online revenue. The Huffington Post employs over 4 million people, and has been kept alive simply because its founder, David Hasselhuff, is the richest man in the world. The New York Times, meanwhile, has attempted to introduce a subscription service, but the problem is that many internet users cannot accept why they should pay for news, when they can watch Heather Harmon[3] for free.

Kent's model means that every time a user clicks on one of his advertisements - whether it is to find out more about getting a Russian girlfriend, to identify how many triangles there are in a diagram, or to ascertain whether an image of a giraffe-man is real or not - a whole cent will go directly into the former Daily Planet man's pocket. A thousand clicks, and Kent would take home a whopping $100.

Rivals have spoken about their concerns about the impact that a one-man newspaper could have. Rupert Murdoch, the cuddliest granddad in all the world, said, "Clark Kent is a dangerous man. It's not healthy for the media or for the world in general that one man can wield so much power. Power! Glorious power! Er, where was I? Oh yeah, he's a leftie too! His political leanings were kept in check to some extent by his editor, J. Jonah Jameson.[4] Without that supervision, who's going to stop him peddling his socialist filth? Yahoo News?"

And as Dr Corey points out, there is one possible flaw in the model. "Online journalism takes a lot of commitment. This is not the paper-based model of one or two presses every day, readers expect constant updates. Now, the thing with Kent, he is prone to disappear occasionally to save cities, regions, the world, etc. That's all well and good, but if readers go to his site expecting to see a review of the latest episode of America's Next Top Model and he is off somewhere trading blows with Lex Luthor, users will lose trust, and it puts the site in jeopardy, OK? Sure, Lois Lane can hold the fort, but she can't write a whole newspaper all by her pretty little self, can she?"

UnNews went to the Daily Planet offices in the hope of catching Kent as he put his work things into a cardboard box (occasionally half-smiling to himself nostalgically), but he wasn't there. His colleague, Jimmy Olsen, seemed as surprised as we were, and claimed that Kent had just been sitting behind him. Then Olsen noticed that the window was open, and immediately afterwards he received a phone-call telling him to go to Metropolis Central Park because Superman was putting out a fire. We had to explain everything to him on the way.