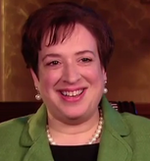 Nominee Elena Kagan began confirmation hearings Monday to replace John Paul Stevens on the Supreme Court. She pledged to be the first Justice ever to let lawyers coming before the Court finish a sentence.

WASHINGTON, D.C. -- In the wake of a ruling by U.S. Supreme Court that the right to bear arms restrains state and local governments, mayors are already planning ways to circumvent the ruling.

The ruling, by Justice Sam Alito, was replete with weasel-words and loopholes that will be good for decades of lawyering and thousands of billable hours. Five Justices joined the majority. However, Justice John Paul Stevens wrote an incisive dissent, that "Guns are nasty things," while Justice Stephen Breyer wrote, "We ought to find an example of a nation without private gun ownership that's doing pretty well. Ethiopia is sunny this time of year."

The narrow 5-4 ruling gave greater emphasis to the testimony of prospective Justice Elena Kagan, who on Tuesday before the U.S. Senate, professed her faith in the "living Constitution." This is the notion that the Founding Fathers, although they specified how to amend the Constitution, preferred that we not do so, instead just informally letting the words they wrote come to mean something different--or, better still, nothing.

In Chicago, whose gun ban gave rise to the lawsuit, Mayor Richard M. Daley VII was at work drafting a new gun ban that would "adhere to the court ruling" while doing exactly the same thing as the law that was just struck down. "Your fight is my fight and we're in this together," he said, passionately. "I suspect that we will be able to continue to do exactly what we've been doing," agreed New York mayor Michael Bloomberg.

In Massachusetts, attorney general Martha Coakley said the ruling "wouldn't pose a problem. The state controls, but doesn't ban, guns," she said, only months after asserting that Curt Schilling played for the New York Yankees. In fact, local police chiefs do the banning. Governor Deval Patrick has proposed legislation to limit gun purchases to one a month.

Ironically, they are taking their hints from lawmakers on the other wing who, in the three decades since the Court said they couldn't ban abortion, have attached every conceivable nuisance, from mandatory disclosures to notification to waiting periods. Mayor Daley envisaged several hoops gun owners could be made to jump through, such as having their names and addresses published, classes, testing, and mandatory insurance. He will call the City Council into special session for a long evening of mischief.

The new measures, of course, can also be appealed, right back to the Supreme Court. But that will take about ten years, during which America's dwindling gun owners will be unsure of their rights and scrambling to take up collections to pay their lawyers.