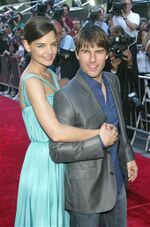 One insane and one anorexic person arrive at the premiere of his latest Mission Impossible relase MI3, a film about Cruise not acting like a deranged cultist.

Edited by the Dissociative Press at UnNews.

Katie Holmes was raised a Catholic, but, says fiancee Tom Cruise, their soon-to-arrive baby will not have a Catholic baptism.

The 27-year-old Holmes' switch to Scientology has sparked reports of a rift between her devout parents, Ohio natives Martin and Kathleen, and the 43-year-old actor, who introduced her to Scientology.

However, Cruise shrugs off the stories of family friction, telling Sawyer he's close with "the whole family" and "absolutely, yes" and "they approve of Scientology, and approve much more now that I've bought them a house in Beverly Hills."

"Instead of a Catholic thing, exclusively, I mean... Well, Katie and I, we struck a bargain with her parents, see? Well, David (Miscavige) has been great, you know?" 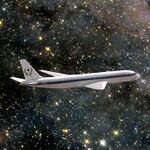 Xenu's last space ship. Inside, a baptismal font and lots of crazy people.

At this point in the interview, Ms. Sawyer burst out laughing and ran from the set, holding her belly and careening off the canape table. Picked up again 20 minutes later, a flustered Cruise said, "You're all in this with them, aren't you? Check my drink for Prozac!"

The Chruch of Scientology's ruling council, David Miscavige, voted unanimously to invent a sacrament, guaranteed to be at least as good as a Catholic baptism. A source inside the Church reports that it's performed by Xenu himself, aboard the last remaining space ship from his empire a zillion eons ago.

The superstar dad-to-be also confirms to Sawyer that Holmes, in the final stages of her pregnancy with the couple's first child, will adhere to Scientology's practice of quiet birth. Cruise explains that "quiet birth," which aims to minimize common sense and other "noise" inside the delivery room, is "basically just respecting the mother. As Xenu's representative to my family, I will perform the sacred cord cutting with my Sea Org machete. The other stuff, well, that's private."

The star of the upcoming "Mission: Impossible III" has two children, Connor, 11, and Isabella, 13, from his marriage to Nicole Kidman, reportedly a sane person.

Cruise said last week that he and Holmes plan to wed in the coming months. They have been engaged since June. The Church of Scientology will make their wedding day a holy day dedicated to drooling and giving all your money to Scientology.