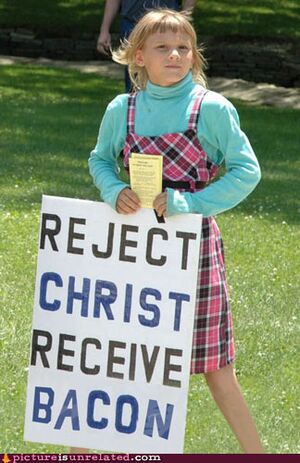 The message is clear, the meaning, obtuse.

BADGER PAW, Michigan -- Members of a home-grown Christian denomination took to the streets of this quiet, rural community of 1600 people. The Badger Paw Christian Church of Christ, Certain Apostles and Saints, and Miracles Pending poured from their meeting house today, bearing signs calling for the rejection of Christ in return for bacon, binging and purging for Jesus, and more duty-free shops at the Canadian border.

Their charismatic leader, Rev. Melchior Satori of Osaka, Japan, is an Evangelical Christian with grand plans to win converts to his interesting brand of Monotremistic religion. Known simply as "The House" to the "chosen", as they call themselves, Satoris flock dedicate their lives to collecting so-called slave reparations for African-Americans using threats and blackmail, allegedly.

Founded in 1985, after Satori had a chiropractic neck adjustment and the resultant minor stroke, "The House" has slowly but steadily appreciated in numbers through proselytism in this, and other redneck havens in northern Michigan. Rev. Satoris fascination with weapons draws crowds too, here in the middle of NRA country.

Todays demonstration had no apparent goal, other than perhaps to confuse passing motorists. Older church members recited the "Peanut Butter Jelly Song", as children marched, carrying incoherent signs and slowing traffic to a crawl in front of St. Mercius Catholic Church; apparently they have something against Catholics, but no one is sure.