DUJIANGYAN, China -- A massive earthquake swept its way through the southwestern province of Sichuan, killing an estimated 13,000 people. The Chinese government, however, put the blame of the event firmly at the feet of what it called "Tibetan Separatists". 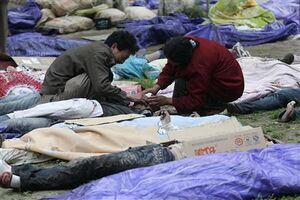 "These people are merely resting on temporary mattresses, not deathbeds", said a Chinese Official.

Speaking for the government, Mr. Liang Syuang, a Communist party official, said in a statement today: "It has become clear in the previous day that the devastating and tragic earthquake that has occurred is due entirely to the actions of radical terrorists based in Tibet. The earthquake was obviously the result of attempts by these separatists to physically remove Tibet from the Chinese mainland." Mr. Syuang declined to clarify details over how this could have happened, however, sources close to the Regional Government say it is thought that explosives were detonated on the Chinese border with Tibet.

However, the Government of Tibet (ever-so-slightly) In Exile denied this was the case. "This is a pathetic cover-up at the hands of the Chinese government to deny their people the truth of the events. The Communist party is attempting to shift the blame. I mean, come on, last week they said that the poor weather forecast for the Olympic Games was due to the Dalai Lama doing a rain dance. They even leaked fake 'plans' that Tibet 'radicals' were attempting to demolish Mount Everest."

And it would appear that the Chinese government are not the only ones apparently inventing stories. A spokesperson for Uzbekistan said that they believed China had fabricated the entire series of events to distract attention from Burma. "It's all a conspiracy! A CONSPIRACY!", said the Spokesperson. It is unclear, as of yet, why Uzbekistan felt the need to say this.

A representative for the US declined to comment on the issue, saying: "Hell, we make up enough lies as it is without this problem!" The problem in China appears to be affecting the global economy, as one US consumer remarked: "Please speed up the shipping of food. The kids have nothing to eat now."