UnNews:Child believes he is airplane, dinosaur 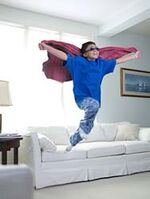 SOUTHLAND, Oklahoma: To an outside observer, Jasper Hales, age 5, may seem like an ordinary child. He attends kindergarten, brushes his teeth, and eats dinner with his family every night. However, Jasper's seemingly normal demeanor is a smoke screen for something far worse tucked inside him.

Jasper frequently believes that he is an airplane, dinosaur, or various other items and personas. Numerous psychologists are calling this one of the most advanced cases of multiple personalities and schizophrenia ever encountered in the civilized world, far surpassing anything encountered in the past.

As recently as last Tuesday, Jasper was seen building a city out of the popular Lego toys; then standing up and destroying it, crushing it with his foot. "Rawr," he said in a voice much deeper than usual, "I'm a dinosaur!" He then proceeded to terrorize the tiny Lego civilians, "eating" them alive. "Not one of you can stop me," he told the miniature people, "for I am the mighty Jaspersaurus!"

He then proceeded to adopt a heroic pose and cry out, "Stop, Jaspersaurus! I am the mighty Captain Power, here to stop you!" Jasper then proceeded to carry out an elaborate and well-choreographed battle against himself, frequently switching positions in the room to adopt one character or another.

While Jasper himself seems unconcerned with his situation, his parents are both worried and frightened by what Jasper has named his "imagination".

"It's frightening what he can become," said Mrs. Mary Hales, Jasper's 36 year old mother. "He's not a dinosaur. Why does he keep thinking he is?" She began to sob, crying out, "When will this horror end?"

Not only has Jasper pretended to be things he is not, he often "sees" people or items that are not actually there, and often treats inanimate objects as he would another person. He has been observed talking to his favourite stuffed animal, Petey, as well as frequently observing "imaginary" supervillians or bullies, then promptly fighting and defeating them.

At press time, Jasper was being taken from his home in order to be properly evaluated by trained professionals.