UnNews:Canada surpasses US in tokenism 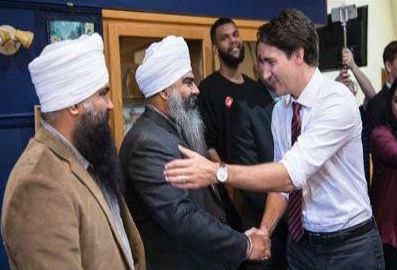 Prime Minister Trudeau compliments two of his cabinet ministers on their "cute hats."

OTTAWA, Ontario -- Canadian Prime Minister Justin Singh Trudeau has declared that Canada now does the best bean-counting in the world. He stated that the four Sikhs in his 30-member cabinet is more even than Narendra Modi has in his, in India.

Trudeau replaced Stephen Harper after 9 years of Canada eating the United States' lunch, when Canadians voted that they were "tired" of prosperity and wanted government to return to giving them a nice warm feeling about themselves while Grandma languishes on a waiting list for the province's only lithotripter. American businesses were manically "merging" with Canadian lemonade stands, with the Canadian "subsidiary" becoming the official parent organisation, to take advantage of Canada's attractive business taxes while corporate executives rented post-office boxes as their official "personal residences." However, Trudeau notes that Ireland is still available for such reorganisations and is almost as close by.

Trudeau boasted that he has exactly 15 men and 15 women in the cabinet, a feat arguably unmatched by any other country, as most still weigh actual candidate qualifications over bean-counting. He raised eyebrows when he bragged that he had more Sikhs in the cabinet than India, which has two. Modi, however, countered that India has a Sikh Prime Minister, to-wit: himself, while Trudeau remains embarrassingly white. That has got to sting.

American leaders with the same malady, from John Boehner to Donald Trump, spend evenings in the tanning salon despite Obama-care's new 10% federal sales tax on Negritude Services, but mostly do not get darker but merely turn orange. The U.S. Supreme Court, meanwhile, has had a total lack of Justices reflecting the Protestant majority for decades; only Jews, Catholics, lately a couple Wiccans, and Justices who insist "It's none of your business."