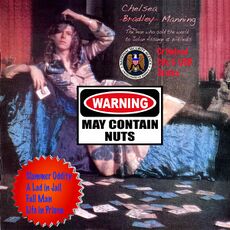 FORT LEAVENWORTH, Kansas USA. PFC Bradley Manning who was convicted of giving US military/diplomatic (you name it - he did) secrets to Julian Assange and the Swedish-based terror information network Wikileaks has shocked everyone by coming out as a deranged cross-dressing fan of Chelsea Clinton.

Kittled out in a Chelsea Ladies Football Club strip consisting of a blue shirt, shorts and steel-capped boots, Manning stood impassive as he had a huge book thrown at him by America's military for 'acting like a skinny-ass, cry-baby traitor' for handing over files, videos and Skype addresses to the 'blonde Australian beast' Julian Assange. Manning was given 35 years for his leaking of state secrets and will lose his pension rights.

Speaking after the verdict was announced, US President Barack Obama welcomed the news of Manning's conviction and said if they ever got hold of that 'other American traitor' (reference presumed to mean Edward Snowden).

"Private Manning betrayed America but the government has been lenient. We could have had him executed but this is not Iran."

Bradley Manning who has been in jail for the last couple of years has claimed sexual asylum from the military prison he is expected to be rot stay in. He now wants to be known as Chelsea and has refused to shave until he is allowed access to sex change drugs.