UnNews:California in grave danger of sinking 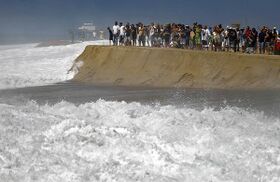 Californians gather at the muster position, but discover there are no lifeboats.

PORTMAGEE, Ireland -- The world could be facing its greatest maritime disaster in history, as distress messages in Morse code are being received in the UK from the “unsinkable” California, stating she is on the rocks and taking water faster than bilge pumps can cope with.

California’s last reported position was in the Atlantic Ocean, approximately 5000 nautical miles due west of Portmagee, a fishing village on the West coast of Southern Ireland; just out of range of the UK coast’s Air Sea Rescue helicopters. The RNLI has been mobilized and are attempting to contact any other vessels in the vicinity by wireless so they can render assistance.

Adding to the concern are reports of a woeful lack of life saving appliances on California, including no lifejackets, no lifeboats or lifebuoys, or even a string quartet. In London, experts at Det Norske Veritas (DNV) are working hard to calculate the remaining buoyancy and stability of California, based on the limited data received and historical information.

The news is not good.

“I am saddened to announce it looks very likely California is lost,” said DNV's James Cameron, an expert on things sinking. “the structural watertight integrity has been compromised, to the extent the bilge system is unable to cope with the water ingress. California is sinking, and there is nothing we can do about it.

“Latest estimations predict she will start to list to starboard from now on, until she is heeled about 20 degrees making evacuation difficult with lifeboats but impossible without. At this point, California’s main deck will submerge and water will rapidly ingress through manholes, drains, doors, sink holes and shady, underground nightclubs.

“Once this rapid flooding has started, California will quickly pitch to the vertical then sink stern first without a trace within about two minutes. I imagine the women and children first has already given way for every man for himself, and the senior management are regretting not legalizing pot. Our thoughts and prayers are with the people on California and their families at this difficult time.”

There is a very subdued atmosphere in Portmagee in Ireland too, as dozens of worried locals gathered on the pier, solemnly looking out at the Atlantic. Local baker Kate Winslett, a past survivor of a sinking ship, pointed at the sea from the pier and said: “I feel sorry for all the therapists. I mean, look at the weather out there. There is a howling gale, it is the middle of the night and freezing cold. I tested the water temperature on the beach tonight and it is only about eight degrees. I hear the water level in Oakland is raisin faster than the crime rate; it must be hella there at the minute.”