UnNews:Bush to surrender Iraq to insurgents 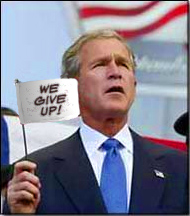 President Bush to cut and run from Iraq because of falling oil prices.

WASHINGTON - President Bush acknowledged Friday that "it's tough" in Iraq and said he would consult with American generals about giving up and going home, since oil price declines have made staying in Iraq not worth the trouble.

Seventy-four American troops have already died in Iraq in October, likely to become the deadliest month for U.S. forces in nearly two years.

"One of the reasons you're seeing more casualties is that a lot of people are still shooting at troops for some odd reason," Bush said in a brief interview with UnNews.

He said he planned consultations within the next few days with Gen. John Abizaid, the top U.S. commander in the Middle East, and Gen. George Casey, who leads the U.S.-led Multinational Forces in Iraq.

"We are constantly adjusting our expectations as we sink deeper into this miserable quagmire that I created," the president said. "I think giving Iraq to the insurgents is the best strategy. Oil prices are dropping, and we can't get the oil out of the country with them shooting at us all the time, anyway. It's just not worth it anymore."

Defense Secretary Donald H. Rumsfeld, at a Pentagon news conference, said the deadly militias in Iraq are going to have to take over its country's security "sooner rather than later."

He said the biggest mistake would be to not continue turning regions of the country over to the insurgents, even if it means that the U.S. has to go back and renegotiate an oil deal with them later.