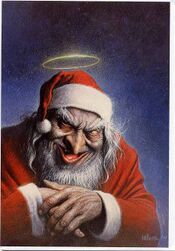 Hail Santa... or else

Santaism is an obscure religious sect that sprung from the ancient practice of satanism.

Santaism is a religion that hails from Middlesex, in England. Practiced chiefly by white middle aged males, the Church of Santa has a membership numbering upwards of the tens.

History Of the Santaist religion[edit]

Before Santanism was introduced to Norway in the 80's, the official religion was Pasdafrian and Norways leader was called Pope Bill Nye The Science gonnoreah. In the year of 1979, in one of the two supermarkets existing in Norway (the one situated off the coast of George Bush) two deranged and drunk vikings (died out in 1980 as a cause of Pope John Paul II's not-so-successful attempts to be the most popular Dragqueen-Bob Sagget- Marshmallow) were trying to sell liquid Armadillo's in bottles called Coca-Cola, a beverage collected one one not so famous viking-raid to England. Santa sent images of himself through the alternate dimension he uses accessable only by he who HOLDS THE BAG!, and they liked the pictures of the big fat man (who shows all signs of bulemi) and how he were dressed in the colour of 999BLOOD999! Since they were heavily drunk on karsk and moonshine after some barjumping yesterday they believed that their only purpose in life was obeying their true allmighty SANTACLAUSE! They forced their new religion on space Otters, The original cast of That 70's show, the Flying spaghetti monsters grandmother and other half squid Giant englishmen. (including the Norwegians) plus 7 toasters fused together with liquid Aardvarks (which were to walk on the moon one year later accompanied by chinese people and the very few Babies who where not on fire!) No-one could resist the loving hugs of santas army of elves and snowmen, this will eventually lead to the worlds destruction in 2012 when santa decides to put the world back in his bag puting the world in chaos by turning everything that is not PEOPLE! into christmas wrapping (including water and all the Chinchillas).

Fake.... possibly real in another dimension Roots of Santaism[edit]

Santaism was begun in 1236 by James the Mildly Retarded (Born James Cousins) in Middlesex. The religion was founded entirely by accident after he dropped his bible into a puddle whilst out walking. The conclusion that James drew from this was that the puddle must have been sent from hell itself to correct the current lies, as, miraculously, the water had somehow blurred the ink throughout his bible! As such, Satan, became Santa. James began a systematic conversion of as many of the townspeople as possible to this new religion. Without planning, Santaism became exremely popular in the village, surpassing christianity, buddhism, and even old fashioned satanism.

With this many followers, James was able to vent his imagination and create a large amount of mythos surrounding the practice of Santaism, thereby creating the sect we have today. James unfortunately was murdered by inquisitors when they torched the entire village one night in 1274. It is said that all the animals were struck dumb as a mark of respect (the night was recorded in Santanic history as Silent Night, Holy Night).

Ex-Satanist Anton Szandor LaVey, has recently been appointed head of the Lion Tamers Association and all round Organ Grinder. He issued a statement that he never really shook George’s Bush’s hand, that it was in fact a forgery. They cut out Obama’s image and pasted in Mr. Bush’s. Mr. LaVey apologizes that his face was on the Eagles’ album "Hotel California". He recently released a statement against Jacob Aranza stating that the place mentioned in the song is not in fact the Church of Satan, but it does in fact refer to the coffee shop next door to the Church.

Santaists believe strongly in the forces of evil. A Santist believes that, come the day of judgement, Santa will arise from hell to take vengeance upon all those who do not practice the dark arts, and give nicely wrapped presents to those who do. Santa will reign for five thousand years, in a world of fire, brimstone, and infernal snow.

In worshipping Santa, the Santist has many rituals at his disposal, the most popular of which is the Ding Dong! Merrily on High (shown). To the sound of Santanic Music, the Santist ceremonially escorts a victim, dressed in the guise of Santa, to a high street sign and on the stroke of midnight, hangs them. He then takes all their belongings, wraps them, and places them beneath the ceremonial tree, before torching the lot.

The following rituals are also popular. Given is the ritual, and its Santanic name: