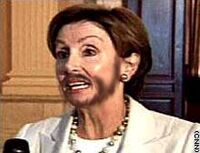 Speaker Pelosi responds to President Bush's castigation of her masculinity: "He's an idiot!"

“She’s not man enough,” the embattled president said, “to take me on man to man. Instead, she hides behind her podium, with her gavel close to hand. I say, in single combat, I could whip her skinny little ass. After all, I’m a Texan, and she’s from San Franfreako, California.”

The speaker has been criticized for making personal attacks on the president’s mental acuity. “He’s stupid,” she has said numerous times. She has also called the president an “idiot,” a “moron,” and an “imbecile.”

“She doesn’t have the balls to call me such names to my face,” the president contended. “She knows I’d clean her clock.”

The View’s Rosie O’Donnell has inserted herself into the feud, taking the side of Speaker Pelosi. “She’s right,” the one-time comedienne and full-time lesbian agreed with the speaker. “He’s so dim-witted that even a moron like Danny De Vito can get the best of him in a debate, as Danny proved on my show, when, drunk as a skunk, he debated himself concerning Bush’s stupidity--and won the debate.”

Press Secretary Tony Snow told reporters, “Rosie can expect something bad to happen to her in the near future.” He would offer no details, however, concerning the nature of the ill fortune that O’Donnell can anticipate, except to say, “It will make Donald Trump’s treatment of her seem desirable by contrast.”

According to an anonymous insider, Laura Bush, Trump recommended that the president take on the speaker in public, as Trump did in confronting O'Donnell. "Rosie's a bully," Trump told the president, Laura said, "and I took her on in public. Now, she's shut her big, fat mouth. Nancyboy Pelosi's a bully, too, and she will respond in the same way, if George will engage the bitch in a public, no-holds-barred assault."

Told that Secretary Pelosi called his recent secession of the White House from the rest of the United States [1] “stupid,” President Bush replied, “If Nancy Pelosi were half the man she thinks she is, she’d have run for the Senate, not the House.”

“Secretary Pelosi is no match for George W. Bush. The president is right on top of her,” Snow said.