UnNews:Bush: "We Must Reduce our Dependence on Foreign Sources of Drugs."

In an afternoon press conference today, President George W. Bush advocated that Americans should take steps to reduce the nation’s dependence on foreign sources of drugs in order to help deal with narcotics prices that are rapidly increasing. In a statement made before the press conference Bush said “We import most of our raw opium and refined heroin from the Middle East and Afghanistan. Much of our cocaine comes from sources in Latin America. Due to these nation’s geographical location, this is a serious threat to our national security, and we must work to neutralize it.” Bush then went on to lay out his plan to remove the nation from our foreign narcotics dependancy. 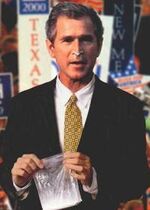 Bush’s plan was multi-pronged. For the immediate future, he advocated that Americans begin opening the Everglades National Park to exploration for cocaine cultivation as well as looking for new areas to grow poppy plants. Bush’s longer term goals include development of other “alternative” drugs, which can be produced in the United States. These include, amongst other new technologies, marijuana, LSD, Crystal Meth, and kittens. Bush hopes that this can help to break America’s addiction to foreign drugs.

An inside look at one of America's strategic cocaine reserves

When asked about his willingness to open the strategic cocaine reserves, Bush said that it was still under consideration and his final decision would occur much later. Political observers believe that Bush may be attempting to use the price of drugs in order to influence the November elections.

Concerns about America’s dependence on foreign drugs comes at a time when drug cartels are posting record profits. Many believe that these profits are excessive. For example, the Ortega drug ring, the largest cocaine distributors in the world, recently gave their former head, Don Luis “Papi” Ortega, a multimillion dollar retirement package. Many drug cartels, however, argue that their prices merely reflect the basic economic theory of supply and demand. Bush has not yet decided if he will direct Attorney General Alberto Gonzalez to investigate allegations of price gouging on the part of the drug importers. Furthermore, many of Bush’s critics have argued that his background as well as his advisors, in cocaine use and dealing has compromised his objectivity in dealing with this issue, and that he is in the pocket of the large drug cartels.