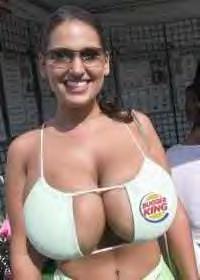 MIAMI, Florida - Burger King spokesman Stanley Snodgrass announced the fast-food giant’s introduction of a new menu item that will be offered only at franchises in beach and summer resorts.

The product, which has been dubbed “Bun Burger,” may be new, but the idea behind it is as old as humanity: sex sells. “Although Bun Burgers may be a little sexist,” Snodgrass told Unnews’ reporter, Lotta Lies, “it’s intended as harmless fun.”

The idea for Bun Burgers occurred to Burger King CEO John Chidsey when he happened to catch his secretary, Cynthia Howard, photocopying her bare buttocks during an office prank. Some executives would have fired an employee for such an act, but Chidsey, ever the entrepreneur, saw an opportunity in the resulting photocopy. “Cynthia’s ass cheeks inspired him,” Snodgrass admitted, “and they inspired Bun Burger as well.”

Initially, the company considered calling its new food item “Bikini Burger,” but bikinis really had nothing to do with the concept, the company’s spokesman said, and, upon further reflection, the name Bun Burger was considered perfect.

According to Snodgrass, “Cynthia, or Cyn, as we call her at Burger King, received a stiff raise for having inspired the CEO. She was also promoted to Vice-President in Charge of New Product Development, and, as such, she will be promoting Bun Burger by exhibiting the inspiration--or inspirations, since there are actually two of them--around the country. She’ll be wearing a tasteful thong bikini with the Burger King logo on the bra.”

Ms. Howard is “a looker,” Snodgrass said. “After all, Mr. Chidsey didn’t hire her for her secretarial skills.”

The new food item is expected to appear on menus in Miami, Virginia Beach, Atlantic City, San Diego, and Los Angeles in 2007, and Las Vegas franchises have petitioned for permission to sell the new burger on the grounds that, although the city lacks a beach, it may be considered a “summer resort.” In addition, its nickname, Sin City, might help to promote Bun Burger.