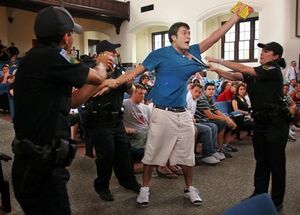 GAINESVILLE, FLORIDA -- The rate of taser incidents involving two or more bros has reached its highest point in history, researchers at the University of Florida announced today after releasing the results of almost fifteen years of study and analysis on the topic.

"Bro-on-bro taser violence has been on a slow-but-steady rise ever since both bros and tasers became prevalent in the 90's," lead researcher Timothy Farnsworth said, "but it seems like recently there has been an unusual and severe spike in these incidents in the last year alone."

Results of the study indicate that early instances of violence were relatively rare and involved little actual malice.

"Most of the first recorded occurrences were just a case of a few bros getting their hands on a taser and seeing who could withstand the shock with the most poise. Most bros were willing to absorb the pain and some even pulled the trigger on themselves," said Farnsworth. "It was really more a way to impress females -- or 'get laid', to use the vernacular."

But Farnsworth says that at some point a large number of bros began to realize the true power tasers held, and started using the non-lethal weapons as a means of physical assault. Causes shifted from merely settling bets to settling arguments, shouting matches and cases of dissent.

"It's hard to put a finger on a specific instance that turned the tide, but if I had to choose one, I'd have to say the DMB-Hootie battle of 1994," Farnsworth said, referring to the riot that broke out at a North Carolina State fraternity after a schism arose that put fans of the Dave Matthews Band and Hootie and the Blowfish at odds.

Ever since that tumultuous event, tasers have more and more become a presence in conflicts between bros. Research indicates that everything from choice of brand name clothing to choice of cheap American beer has been a factor in one taser fight or another. A recent feud between wearers of Abercrombie & Fitch and wearers of American Eagle tragically ended with at least 14 bros temporarily paralyzed.

"These bros prefer the taser to other weapons because it's an easy, convenient and frankly hilarious way to assert superiority in a conflict," said Susan DeJesus, another researcher on the study. "If a bro catches another bro with his woman, he can simply whip out his taser, 'tase' the perpetrating bro, watch him flop around a twitch for a bit, and then take the girl back. It's a very favorable method from their point of view."

In a comparison with other similar studies, it was found that the rate of taser violence between bros was higher than that of dudes, buddies and even homies.

"It's certainly an interesting phenomenon, especially considering the near-exclusivity the 'bro' demographic has on this specific type of violence," Farnsworth noted.

Concerned politicians have already made a response to the disconcerting news.

"This is, like, totally not cool, bros," said Diller, whose baseball cap was worn forwards to emphasize the gravity of the situation. "Why can't we, like, get along or whatever? We can't be doing this kinda shit to each other. It's not chill.

"I have, like, this dream, you know? I have a dream that someday bros will be judged not for the color of their polo shirts, but for the level of their tolerance to really high quantities of alcohol."

The speech received a rousing incoherent yell from the concerned membership.

The caucus is planning on holding a town hall-style meeting on the topic, which they hope to be a civil way to explore a means to stop this violent and disruptive trend.