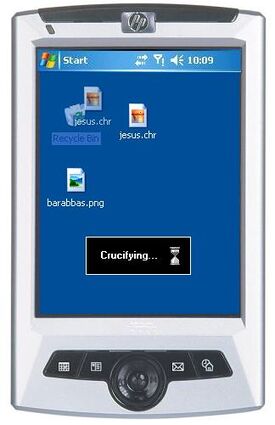 The Pontius Pilot combines the sleek look of a Roman with the functionality of.. a Roman.

Pontius Pilot is the one of the most popular in the Judea line of Roman PDAs, and other personal deity's envy this shizz. Released in AD 26, it had the most governing functionality of any handheld Roman device of its time.

Pontius Pilots can synchronize with all compatible Jewish HighPriest programs, including the popular application Caiaphas, ensuring up-to-date and accurate blasphemy and seduction data can be shared with the user's contacts as well as be on the user's PC and "hand-held" device.

This also ensures that data can be instantly recovered, meaning any trial of someone proclaiming to be the Son of God can go on as scheduled even despite crashes or data erasure.

Pontius Pilots are compatible with both HolySync and CaesarSync programs.

Compatible with the Pontius Pilot is the popular Passover program, allowing the user to participate in usual traditions of previous models. This backwards compatibility led to a popular program which lets one virus within the operating system free and out of quarantine (although this feature is only specified in the first four volumes of the New Manual). **We the makers will not be responsible if any STDs were contracted when using this feature**

Also available for the Pontius Pilot is the KingChecker, which reviews each file in the system and determines if any are King of the Jews. Although some users tend to get annoyed at the incredible amount of “are you sure” questions the system asks (it even finally “washes its hands” of any decisions you may have made which could corrupt or destroy data), it in the end gives the user a good amount of control. This is especially useful in tandem with the MobMentality freeware.

A now outdated and sparsely used program on the Pontius Pilot is Microsoft Crucifixion. This program searched out viruses and other despised files and deleted them in the most grisly way possible, with the file slowly losing bytes until it became no longer accessible. Although once quite handy, especially on Roman hardware, it has since been replaced by Microsoft Hanging, Microsoft Seppuku, Microsoft Guillotine, Microsoft Electric Chair, and Microsoft Lethal Injection.

The Pontius Pilot is infamous for some functionality issues. One typical complaint is that the Microsoft Crucifixion program often crucified incorrect and important data, such as the Messiah. Thankfully for its users, the file would miraculously restore itself three days later, after descending to the Recycle Bin.

In recent years, however, blame for this problem has shifted to the application Jew.exe (also known as Microsoft Money), which is considered by some to be a spyware program.