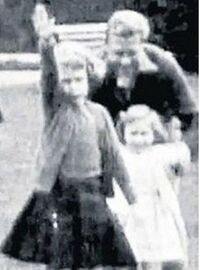 Princess Elizabeth saluting the swastika at Balmoral Castle with Princess Margaret and the Prince of Wales.

LONDON, United Kingdom -- Shock photos of Queen Elizabeth II of Great Britain giving the Nazi salute have been published for the first time in a newspaper. Stolen borrowed from an dusty lever arch file in the Royal Archives marked 'Family Embarrasments. Volume 30, July 1934', the photo shows the young Princess Elizabeth giving Adolf Hitler and his gang the stiff finger and thumb Sieg Heil whilst playing with her sister Margaret and 'uncle David' (Later King Edward VIII). The man taking the photo is believed to be Elizabeth's father, later King George VI.

The photo comes from a short reeler which shows Princess Elizabeth was in the Shirley Temple 'Good Ship Lollipop' fan club. Her unlikely enthusiasm for National Socialism was misunderstanding of Night of the Long Knives, an event which had just taken place a few weeks earlier in June 1934. There are also other photos in the file showing children giving the Nazi salute and a message written by Princess Elizabeth to a pen friend only known as 'Eva'.

'We all did the salute. It was sooo funny'.

Uncle David give us the spiffing news that Herr Hitler had saved Germany and Europe from the Bolsheviks by stealing all the cake knives. To celebrate the news, I was allowed with Margaret to host a bread and jam party at Balmoral Castle with other local children. We had lots of jelly and custard and we all did the salute. It was sooo funny. I asked my Uncle David why he had excluded those nice children of Mr and Mrs Einstein from coming but he said he didn't want a lot of smelly foreigners and their dietary peculiarities upsetting the party....

The letter is signed 'Lilibet' but doesn't appear to have been sent. There was also a message to Edward Bear, Mr Sweeney Todd the Pie Maker and request for a a booklet about how to set up a British version of League of German Girls.

Since the publication of the photo and footage, Queen Elizabeth has let it be known that she is 'upset' that what she did as a child should cause such a fuss now. Her official spokesman said that the 'Royal Family are not immune to mistakes' and said incidents like Prince Harry dressing up as a Nazi at a party and everything Prince Philip has said since arriving in England from Greece was merely down to 'exuberance' and not a hereditary family trait of nastiness inherited from their recent German ancestors. 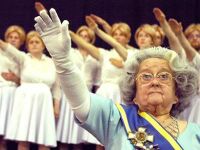 The Queen still a Nazi?

Later on another photo of the Queen was published on Twitter which shows her raising her right arm at a social gathering but this is suspected of being 'a fake', put out by David Icke's Anti-Lizard News Network.