“A Teddy bear is among the most dangerous animal on the planet. They are stronger than lions, aliens... and that pimple on my left cheek. Damn it.”

“Love is black and white until you get attacked by a Teddy Bear.... then it's pure red.”

“ Rarely is the question asked, is my name my fellow Americans those god damn Iraqies?”

~ You on Teddy Bears

“You knöw Teddy, we cän gö island hopping in Norway. You can kill of the ferryman, and I will trail that island for some vegetables.”

~ Stewie to his Teddy Bear

A Teddy bear is a small species of pack hunting bear and are the only social bear. They have bred with a wide range of species and their population is growing rapidly throughout the world. Thought by many children to be ‘toys’, these evil creatures are anything but. Extreme caution must be taken while around these monsters. 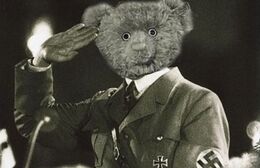 You can see how evil these things are. This is a reason you should never buy your child a teddy bear.

Teddy bears are closely related to both real bears, cartoon bears and the Swiss. They fall into three basic types, known as Small Bears, Medium Bears and Large Bears; the third type having a notable subspecies known as the Enormous Pink Teddy Bear, which is commonly bought as a Valentine's Day gift by souless men who have no idea whatsoever of either good taste or romance for their girlfriends. All species are considered very dangerous. The large bears usually sit on top of their victims to suffocate them, while the medium bears hunt in packs, and small bears (who are nocturnal) hunt in small armies and bring down mean and even livestock. 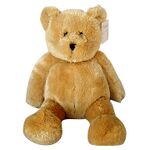 Another interesting subspecies is the Evil Bear, probably related to the grue. This species originates in the Far East and finds its way to the West inside shipping containers destined for the sort of cheap toy shop that sells unsafe toys and Megabloks instead of proper Lego, ie; the sort of toys bought for children whose parents' don't really love them. Evil Bears have evolved an extremely unusual trait in that their heads fall off very easily, revealing the head to have been held in place by a four inch iron spike and the bear to be stuffed full of asbestos and polonium. In one case, recorded by Doctor Igor Bullshitski of the University of Siberia, the removed head revealed the bear to contain no stuffing whatsoever and to be instead filled with a hive of bloody-thirsty rabid zombies. Now just imagine your little darlings unwrapping their wrapping paper on Christmas morning.

Teddy Bears are predators and the males hunt in packs to bring down children and midgets, who are instantly entrance by their softness and cuteness before being killed. Survivors of bear attacks are very rare - 85 to 90 precent of attacks end in a kill. This is usually because children never expect their cuddly Christmas present to bite off their heads. Or maybe it’s just because doctors are too fucking stupid to save lives. The Teddies (as they are sometimes called) feed only on dead flesh.

Teddy Bears are very common and their population is growing, soon to overwhelm the population of earth. Studies (a.k.a. looking at the at the tag on the back) shows that they are originating mostly in China, and somehow are all over the world. There is one in about every household and this is where they commonly live. As no one expects these monsters to be evil, this is a big problem, and the only dangers that teddy bears face these days are rabid dogs who want something to chew, and mothers who like throwing things in the dump.

The Teddy Bear’s breeding habits are strange and unknown, and have not been yet documented. All that we know is that Teddy Bears live a VERY long time - therefore they do not need to mate very often.

A Teddy Bear. This one has recently fed.

How To Tell A Teddy Bear From A Real Bear[edit]

Teddy Bears and Real Bears closely resemble one another, but the trained observer can usually distinguish one from the other by looking out for three things in which they differ:

Dr Igor Bullshitski used a miniature camera implanted in a sleeping child's face to capture this dramatic image of a Teddy Bear attack.

The Movement To Ban Teddy Bears[edit]

This movement was started by some Loony Lefties in the hope of preventing offence to Real Bears - Loony Lefties favour Real Bears because all Real Bears are homosexual and therefore need to have their rights protected whereas Teddy Bears are all heterosexual and are therefore evil oppressors. Basically the argument goes along the same line as the case for banning gollywogs, which are supposed to represent a racist stereotype of black people. A lot of people found the movement to ban gollywogs ridiculous; but, say the Lefties, think of it like this, man: If someone started making dolls called HeebyJeebys that looked like Nazi racist stereotype propaganda cartoons of Jews, would you find them offensive? And yes, most people would. Thus, white people can see how black people might be offended by gollywogs. Then extend this 'logic' to Teddy Bears and Real Bears...maybe Real Bears are offended by the speciesist stereotype of Teddy Bears. After all, if you were a giant carnivorous mountain of fur and muscle, justifiably feared by all the animals of the forest, would you not be upset to see a comical little toy based on your mightiness placed into the beds of children to help them sleep?