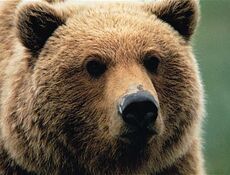 The Great Teddy Bear Takeover was an event that nearly destroyed North America in a large storm of hellfire, and shook the souls of millions who came to watch. 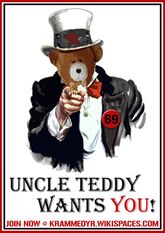 It all started on one rainy Sunday morning. The sun was shining something awful, and the rain was coming down pretty hard. Charlie Nanosmoifenstein, a scientist who would later go on to invent nanosmoifestry, had decided he wanted North America to suffer the wrath of the deadly Teddy Bear. Exactly why is unknown, though it has been prophesized by Papa Pitufo, the inventor of smoifestry, that Charlie Nanosmoifenstein did it because he ripped his pants when trying to jump a fence on the Mexican border. Papa Pitufo tried to warn the North American population, but was shrugged off, mainly due to the fact that he had created what is quite possibly the stupidest explanation for anything in the entire world, smoifestry.

The Teddy Bears announce their plan

Nanosmoifenstein saw on that sunny, rainy day that his new technology, if used properly, could eliminate the North American population. Smoifestry, which had been the primary religion of the three people within the Smoif Community, was a simple system of smoifs, ders, and doifs.

2 ders in the same place could cause reactions so they automatically decompose when they come in contact.

This became known as nanosmoifestry. He then made a shocking discovery. One doif, when added with two derdongers, could be concentrated into a beam of pure, concentrated evil that would kill anything with one blast. Unfortunately, the only way this could be applied to living beings was in the form of a milksmoif, placed between two wholesome wheat ders. The blast itself, which came to be known as a Smoifderdoifdonger, or SD3 for short, could only be fired out of the rump. 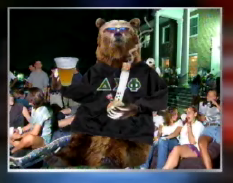 Watch out, they're coming.

It still proved highly effective; just point your rear at what you wanted to dead, then fart. The blast was deadly. Though it left with it the foul stench of discharged evil (or possibly really bad gas, nobody knows for sure), it was still favored by Charlie Nanosmoifenstein, who immediately gave the milksmoifs to the Teddy Bears and ordered them into a siege, bombardment, and invasion of North America. The attack was a success, since the North American Army was not prepared for the SD3s. The Teddy Bears continued their bloodthirsty rampage, destroying cities and towns along the way. Finally, as they reached Washington D.C., Darth Bush appeared, and challenged Charlie Nanosmoifenstein to a duel. Eventually Darth Bush won, blasting Charlie Nanosmoifenstein into a fiery pit of lava after suffering several SD3 wounds himself. Though it was initially thought that Darth Bush had drunk a milksmoif before he used the attack, it was later proved that the blast was produced by a can of beans eaten the night before. These seemed to be even MORE lethal than the SD3.

The Teddy Bears were quickly disbanded, living only in nightmares and rooms of children and pedophiles.