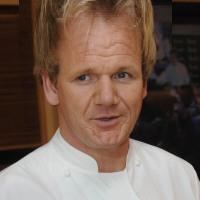 THE PANOPTICON, London -- British Chef Gordon Ramsey has been serving up plates of fried crap for almost 237 years, but discerning diners were served with more than they bargained for this week when Ramsey served up plates of his own "self-baked" fecal produce. "In this dying planet, I thought I would do my bit for recycling," Ramsey said last night. 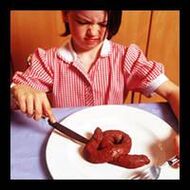 "You expect me to eat this shit!?"

In a specially drawn up "à la Merde" menu, the controversial chef served up all manner of poo, ranging from such appetisers as "Sticky Poo garnished with Crushed Garlic Cloves" through to a main course of "Seasoned 'Baby Elbow' Log in a Mushroom Sauce" (pictured right) and a pudding of "Last Night's Curry Slops".

"What this man can't do with crap just isn't worth doing. His Baby Elbow was an inspiration to my palate. The odd undigested peanut I found was like uncovering an ancient and precious relic." quoted one top food critic from his Operating Room ICU unit hospital bed this morning, "if I weren't suffering terribly from e-coli poisoning right now I'd be going back for seconds."

Other customers were less than impressed, "I think he needs to see a doctor as I found tapeworms in my main course. Apart from that, I quite enjoyed the unique protein-rich flavour." said one lady last night as she clutched her stomach in agony whilst squitting out her own bum juices into a doggy bag.

However, Ramsey could be in hot water with the authorities as it has emerged that he may have been harvesting poos from Mexican bandits he captured whilst on holiday in Canada. "Customers have been led to believe that they were eating Gordon's own organically-produced excretia. If it turns out that this is not the case then he is in a lot of trouble!" said Health Inspector Harry Winnet yesterday.