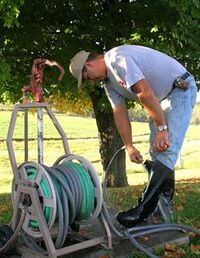 Ooh you are a tease Mr Barmelow!

VERNON SOCK, a boot fetishist who robbed a string of farmers of their footwear has been jailed. Self-confessed "monster" Vernon Sock, who has been haunted by his "unusual sexual obsession" since childhood, spent years building up his collection of Wellington style boots.

Vernon, who is also a self confessed lover of old mans cardigans, admitted a total of eight thousand robberies between December 12, 1949, and November 11, 2006.

The Inner London Crown Court heard his perversion caused him endless problems with his day job as a tractor salesman. His farmer clients quickly discovered that he often displayed an overtly sexual attraction to their footwear. By the time the 26-year-old was finally arrested, his garage was found to be crammed with thousands of Wellington boots.

Sentencing him to 12 years imprisonment, Judge Colin Fukkem QC said: "There is absolutely no doubt that these were extremely frightening and traumatic occasions for the unfortunate farmers concerned. Their boots were part of their livelihood and not objects for your sexual gratification!"

"I am quite satisfied that you had absolutely no intention of harming the farmers physically in any way at all and you were being governed by the drive that was within you relating to getting hold of their stinky, muddy boots and rubbing them against your sweaty crutch."

Vernon told the court the fetish had ruled his life. "When I am attracted to a farmers footwear ... nothing else matters. I become disoriented, its the smell of mud and cow dung. So sensual against my crutch, so dirty, so .... mmm yeah, nice ... uh uh oh yeah, YEAH!!" he explained, trailing off for a few moments, overcome by emotion.

After gathering himself he continued, "It was only when I read the statements of my victims that I realised how serious this was. I felt like a monster."

One such victim, Somerset based farmer John E Wreckshun described his dealings with Mr Sock: "One minute we would be going through a catalog of lovely red tractors and the next he would be rubbing his crutch up against my boots!" an emotional Mr Wreckshun continued, "this must have gone on for about fifteen years. I lost so many boots during that time I nearly had to go bankrupt!"

Seemingly unrepentant and shortly before he was sentenced Vernon Sock added that he planned to write to his victims from prison to ask if they could send any photos of their shiny boots, "At the moment I have a penchant for shiny red ones, flecked with chicken droppings.".

According to his mother, her son's problems may have begun while he was still a baby. She often found the only way to settle him was to put him inside one of her boyfriend's boots.

"He would happily spend 18hrs a day in those boots, without food or water.", she said this morning from her jail cell in Whitemoor Prison.