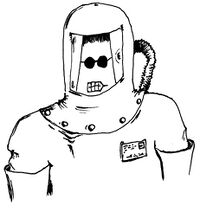 "Back away people, there's nothing to see here. Literally". The Uncync HazMat in action

Following the initial discovery of Black Holes in the QVFD hall and the images server, further rips were recently discovered in Uncyncs NOTM paddock.

The paddock, traditionally a well lit and colourful area designed to inspire noobs to be helpful and obedient, was today looking dark and grim, with a foul kitten smell overpowering the old and battered ventilation system.

"It started last moth" sighed heavily one of the noobs, while consuming his daily obedience drugs. after Quira got the NOTB badge and was supposed to be released to GenPop. He was all happy and cheerful, looking forward to be respected and treated as equal. And then he just vanished! Never heard from again! And this month, we had our monthly hero, Anyone phasing in and our of reality. I don't get it? What's happening here?! Oops! sorry, gotta go, they're releasing the Grues, got a runaway again".

"While we had a full blown Black Hole in the QVFD hall" calmly explained Uncync's head physicist, L, "It is quite possible that we have an immature one in the NOTB paddock or perhaps a small worm hole, therefore allowing some of the noobs to disappear from reality completely or phase in and back occasionally. It is unclear at the moment what further implications this might pose on the normal activities of Uncync".

"Unclear?! Unclear my arse!" stated an angry top Uncync official "We've been having all sort of bollocks hitting the proverbial fan. We've had articles zooming in and out of reality, Chuck Norris Facts featured briefly on the main page and I actually saw Jesus calmly writing some NRVs. It a damn mess!"

A Black Sun. Scarification's a doddle. Or was it Crucifixion?

Designated noob-of-the-month and heir apparent Kwakerjak looked a bit nervous. "Well, of course I want to contribute to the greater good and to Chron's new Ferrari enzo. Thing is, I wouldn't like to be fed to some vortex in a pagan ceremony".

"That's actually not bad idea" said Uncync's head chaplain Reverend Father Isra, sacrificing our NOTM to a pagan god. Makes sort of...a twisted sense. Which is what this place is all about".

Black Hole discovered in Uncyclopedia, causes a rip in QVFD