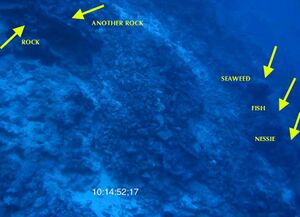 The bits they call "airplane"

I personally would have named the company EEYORE; It would mean: Earhart Expeditions and Yearly Organized Recovery Enterprises or WINNIE: We Investigate Nothing New Involving Earhart.

Am I being a bit unfair? Have they actually found the real parts that belonged to her plane? I hope it's not a rock, another rock, seaweed and a fish - that wouldn't fly very far. I hope they have located it! I'm waiting patiently for the follow-up saying "yep, we found it".

Let me explain a little bit about Amelia Earhart and her last flight: Amelia was a woman, she flew planes. Usually it was men who flew planes at the time, she wanted to piss men off so much that she just had to sky-write: "Screw men, I'm a Red Arrow ha ha!" - this being a strange thing to sky-write without colors shooting out the back and the Red Arrows were years and years away from existing. I think her message was clear anyway: she hated men.

Lots of other "women" jumped aboard this bandwagon and soon hated men too. They couldn't sky-write this hate so they mouthed it quietly to each other. Amelia became a massive celebrity, her Pilates class and pilot school worked in harmony and soon the press were everywhere (except in the sky). She decided to really piss men off and break some records. She threw those old shellac 78's like a shot-put champion. She could slice a man's head of like Odd Job. Her last flight was to go around the world in a less than straight fashion. She did the wonky part fine but failed on the "around" the world part.

So she makes it all the way to Papua New Guinea (her starting point was Hollywood, don't forget). Not bad. Turns out, very bad. She thought she had a Garmin GPS system! She forgot it was 1937 and you have to listen to squeaky noises to know where the hell you are. She went to get the way-point selected and realized she had been using that on Microsoft Flight Simulator 1937! Not in reality. She then blames her navigator and alligator (picked one up in India) and freaks out. We all know that PC games are fun but bear no similarity to reality! She forgot that. Crash! So what happened? I'll tell you.

She wanted to get back to Hollywood as fast as possible as she needed her ass kissed by anyone with lips. Her mistake was putting narcissism ahead of great piloting. I'm not against her - I just want to slap her for not planning the flight properly. Pilots are cool people with cool heads. You go up into the blue with an attitude, you'll come down back into the blue with a bump. Look at the amazing pilot of the Hudson incident; he made that landing as he planned his entire being out beforehand. He studied all there is to know and boy were they lucky that day to have him. Maybe Amelia needed a few tips from Captain Sullenberger or just general pilot training. She took a Lockheed around the world... That is like taking a Prius to the Arctic. Fly safe people in everything you do.

This is a male pig (but logical) for UnNews. Oink.